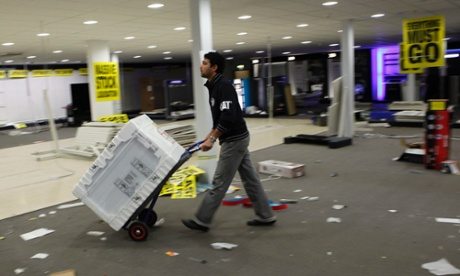 The business secretary, Vince Cable, has ordered an inquiry into the collapse of high street electricals chain Comet after the government was left with a £50m bill in unpaid taxes and redundancy costs, reports The Guardian.

The Department for Business, Innovation and Skills (BIS) confirmed that the Insolvency Service had begun a “fact-finding” investigation into the high street chain’s failure: “The purpose of the inquiry is to investigate the circumstances surrounding its insolvency and establish whether further action is required,” said a spokeswoman.

Cable has discretion to demand an investigation “where it is in the public interest to do so”. The inquiry is being conducted under section 447 of the Companies Act which can be a precursor to a more in-depth probe – as was eventually commissioned in the case of serious corporate scandals such as MG Rover.

There were 150 such fact-finding investigations last year and their existence usually remains confidential. Investigators are allowed to demand documents, enter offices and speak to any individuals considered to have relevant information. The matter may rest there, but in the that event wrongdoing is uncovered the Service can seek to have directors disqualified or, if they believe there is evidence of criminal behaviour, pass a file to the police or the Serious Fraud Office.

“We are not in a position to comment further at this stage,” added the BIS spokeswoman. “To do so could prejudice the outcome of the investigation and any future action.”

The remaining 45 Comet stores still trading closed for good on Tuesday night, bringing the total of job losses to 6,900.

Turnaround specialists OpCapita took control of Comet in February after its stock exchange-listed parent company Kesa failed to find a buyer for the loss-making chain. It received a £50m dowry from Kesa, which has since renamed itself Darty. At the time OpCapita promised to keep the chain going for 18 months. However, at the start of November it called in administrators blaming tough trading conditions and the lack of support from credit insurers who refused to cover its suppliers.

In the financial postmortem released by administrators Deloitte on Monday, it became clear the retailer’s unsecured creditors – a long list that includes landlords, suppliers and customers – would shoulder losses of £232.9m. That figure includes the retailer’s £26.2m unpaid VAT and payroll tax bill as well as the £23.2m of redundancy pay owed to staff, which the government is meeting.

The group ranks behind priority creditors, which include OpCapita and its co-investors, who are owed £145m but stand to collect the £50m raised from a sale of Comet’s remaining stock and assets. Deloitte’s report also revealed that OpCapita, which is run by former investment banker Henry Jackson, and its backers billed the heavily loss-making company £12.8m in nine months for financing and “monitoring” fees. The complex financial arrangements underpinning the deal mean it is not clear whether OpCapita, which also owns entertainment specialist Game, has turned a profit from the deal.

OpCapita said: “We will of course assist fully with any inquiry and welcome the opportunity to provide BIS with factual information relating to the circumstances which led to Comet entering administration. Once the administration is completed, Deloitte will issue a full report to creditors which will be publicly available, as is the initial report published on Monday. OpCapita has no further comment to make at this stage.”

Hopes of finding a buyer for Comet were not high. Deloitte said 118 parties expressed an interest in buying parts or all of the chain but none of the four offers that subsequently emerged was viable. It is still speaking to a “small number of parties” but talks are thought to centre on the sale of the brand name, with online retailer Appliances Direct the frontrunner.