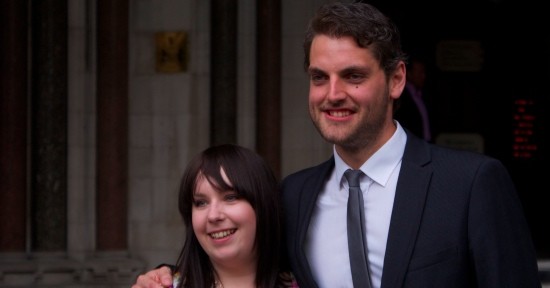 Paul Chambers, who was found guilty of sending a menacing tweet, has won his high court challenge against his conviction reports The Guardian. Outside the court, Chambers, 27, said he felt “relieved and vindicated”, adding: “It’s ridiculous it ever got so far.”

He had tweeted in frustration when he discovered that Robin Hood airport in South Yorkshire was closed because of snow. Eager to see his girlfriend, he sent out a tweet on the publicly accessible site declaring: “Crap! Robin Hood airport is closed. You’ve got a week and a bit to get your shit together otherwise I’m blowing the airport sky high!!”

He has always maintained that he did not believe anyone would take his “silly joke” seriously.

The lord chief justice, Lord Judge, sitting with Mr Justice Owen and Mr Justice Griffith Williams, said: “We have concluded that, on an objective assessment, the decision of the crown court that this ‘tweet’ constituted or included a message of a menacing character was not open to it.

“On this basis, the appeal against conviction must be allowed.”

Chambers said outside court: “It was a long, hard road. I would like to thank everyone on Twitter.” He had lost two jobs because of his conviction, he said, but “it was now time to move on”.

After the judgment Chambers’s supporters accused the Crown Prosecution Service (CPS) of wasting public funds in pursuing its action against the trainee accountant.

Louise Mensch, who is Chambers’s constituency MP, was in court to hear him cleared. “The CPS owe the whole country an enormous apology,” she said, “for having wasted public money and put him through two and a half years of serious stress for what was a joke.

“When parliament returns we will be asking searching questions about why freedom of speech was trashed. There was nothing menacing about this message. It was completely obvious.”

Chambers had arrived at the snow-bound airport on 6 January 2010 hoping to fly to Belfast to meet Sarah Tonner, whom he had met on Twitter where she was known as @CrazyColours.

A week later he was arrested by four officers from South Yorkshire police who visited his office at a car distribution firm in Doncaster. Chambers subsequently lost his job as a financial supervisor.

He was prosecuted under section 127(1) of the Communications Act 2003, which prohibits sending “by means of a public electronic communications network a message or other matter that is grossly offensive or of an indecent, obscene or menacing character”.

In May 2010 Chambers was convicted by the district judge Jonathan Bennett sitting at Doncaster magistrates court and fined £1,000. In November 2010 the crown court judge Jacqueline Davies, sitting with two magistrates, dismissed his appeal, saying that the electronic communication was “clearly menacing” and that airport staff were sufficiently concerned to report it.

John Cooper QC, who represented Chambers, said: “It’s an important decision for social networks. It means that in future not only does a message have to be of a truly menacing character but the person who sends it has to intend it to be menacing.

“Now people can have a joke even if it’s a bad joke … this case should never have been prosecuted and it may be that the CPS will have questions to answer about this.”

David Allen Green, Chambers’s solicitor, said: “This shameful prosecution should never have been brought. For two and a half years the CPS have adopted a ridiculous position. There are very serious questions for the director of public prosecutions to answer in this case. We welcome this very clear judgment that sets out a high threshold for what constitutes a menacing character.”

After the lord chief justice left the high court there was celebration and applause. The comedian Al Murray was one of those in court to support Chambers. “It’s a victory for common sense,” he said. “It’s extraordinary this ever came to court. The judges saw there was no menacing message. It’s a really important victory.”

Asked outside the Royal Courts of Justice whether he would employ Chambers as a gag writer, Murray replied: “No.”

Index on Censorship, the free speech campaign, welcomed the court ruling. “Today’s judgment is an advance in the justice system’s handling of free speech on the web,” said Kirsty Hughes, the organisation’s chief executive. “As more and more of us use social media, it is important that the law understands how people communicate online. This ruling is a step in the right direction.”