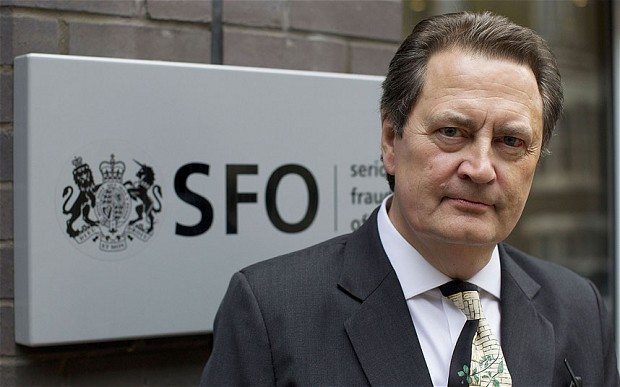 The men are the first to be arrested in connection with the criminal investigation and were taken into custody by City of London Police on Tuesday morning, reports The Telegraph.

Former Citigroup and UBS trader, Thomas Hayes, as well as Terry Farr and Jim Gilmour, employees of inter-dealer broker RP Martin, are understood to be the men arrested at their homes in Surrey and Essex.

All three men are understood to have been involved in trading connected to Yen Libor, the benchmark Japanese borrowing rate, according to a source with direct knowledge of the investigation.

The SFO’s actions mark the first arrest of bank staff in connection with allegations that major financial institutions across the world conspired to manipulate key borrowing rates. Further arrests are expected as the investigation continues, with former employees of Royal Bank of Scotland thought likely to be drawn into the net.

“It is a modern illusion that an act cannot be prosecuted as a crime just because there is not a specific piece of legislation which proscribes it. We have some perfectly good laws, they just need to be applied,” he said.
Barclays is the only bank to have been fined for attempting to rig Libor, paying £290m in June to settle with British and US investigators. The settlement led to the resignations of the bank’s chief executive, Bob Diamond, as well as its chairman, Marcus Agius, and chief operating officer, Jerry del Missier.

RBS and UBS are thought to be close to reaching their own settlements with the various authorities investigating Libor-rigging. Stephen Hester, chief executive of RBS, said that he expected the bank to have reached at least one settlement before it reports its full-year results in February.
More than a dozen banks are being investigated over their involvement in the manipulation of borrowing rates, including Lloyds Banking Group and HSBC.

Speaking on Tuesday, Michael Cohrs, a member of the Bank of England’s Financial Policy Committee, said the scandal showed banks had become too big to manage.

Lawyers have warned that attempting to bring criminal charges against individuals involved in the scandal will be difficult and said prosecutions would focus on junior staff.

“In the absence of direct evidence implicating them, those higher in the banks’ hierarchy are more likely to face personal regulatory sanction by the FSA than criminal prosecution,” said Andrew Oldland QC, a former SFO prosecutor.