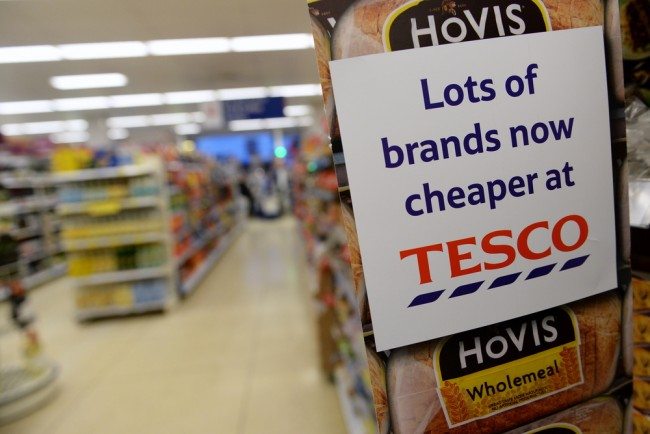 Hopes of a rapid recovery under its new boss, Dave Lewis, are fading, with City analysts forecasting a fall in like-for-like sales of between 2 per cent and 3 per cent during the 13 weeks to 30 May, the Guardian reports.

The performance is an improvement on the first quarter last year, but marks a slowdown from the Christmas period, which saw UK sales excluding fuel fall just 0.3 per cent, cheering investors eager for good news after Tesco’s worst year on record.

The board will come face to face with shareholders at the annual general meeting in London’s QEII conference centre in Westminster on Friday, and shareholder advisory groups are lining up to criticise Tesco’s approach to pay.

Investors are being urged to vote against the generous terms offered to Lewis and the golden goodbyes awarded to the former chief executive Phil Clarke and chief finance officer Laurie McIlwee.

The shareholder advisory group PIRC is also urging a no vote on the election to the board of the new chairman, John Allan, on the grounds that he is also chair of the FTSE 100 property group Barratt Developments.

In a note this week, PIRC warned that “a chair of more than one large public company cannot effectively represent corporate cultures which are potentially diverse, and the possibility of having to commit additional time to the role in times of crisis is ever present”.

The pay package awarded to Lewis by Tesco’s remuneration committee, which is headed by the former Barclays executive Deanna Oppenheimer, was branded excessive by PIRC, which says his annual and long-term bonuses could be worth as much as five times his £1.25m salary this year.

There is also disquiet about the gap between boardroom and shop floor rewards. Lewis, who joined from Unilever in September, received £4.13m last year from Tesco, inclduing £3.3m in compensation for incentives he had to surrender when leaving his previous employer.

The advisory group Manifest said his pay was 193 times the average Tesco wage of £21,400.

Manifest is concerned that Lewis’s incentives were awarded without shareholder approval, but Tesco will use its annual meeting to put a revised remuneration policy to the vote.

An “amber top” warning from the Investment Association, which represents big fund managers, was issued against the payoff for Clarke, who left with a £1.2m lump sum and a pension pot approaching £14m. McIlwee received £1m and a pension pot of nearly £7m.

Tesco’s board concluded it had no choice but to pay up or face legal action, but the annual report states that “if new information arises which would change this assessment, we have explicitly reserved the company’s rights to pursue recovery of these payments”.

The Serious Fraud Office is investigating the supermarket group after a mis-statement of commercial income from suppliers last year. Trading profits were found to have been overstated by £326m. In April, the company recorded a £6.4bn pre-tax loss, after Lewis slashed the value of its property portfolio as part of an accounting overhaul.

Lewis has said Tesco is unlikely to report a profit in the coming year as it ploughs money into better products, lower prices, customer service and store upgrades. The group is raising money through disposals.

Dunnhumby, the business behind Tesco’s Clubcard, is currently up for auction and HSBC is understood to have been hired to explore a sale of the South Korean unit Homeplus, Tesco’s biggest operation outside Britain.