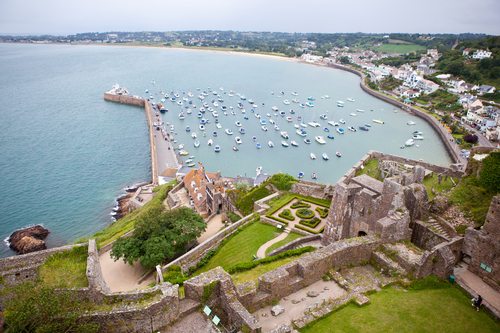 They also argue that they are more open about their tax regimes than they are given credit for.

G8 leaders will hold their latest summit in Northern Ireland on Monday.

Ways of combating aggressive tax avoidance and mass tax evasion are expected to be high on the agenda of leaders including UK Prime Minister David Cameron, US President Barack Obama and Germany’s Chancellor Angela Merkel.

Up to now the focus of the world’s media has been on big countries pointing their fingers at small islands – accusing them of helping big corporations and wealthy individuals avoid paying tax.

But now the leaders of some of those offshore financial centres suggest that the world’s largest economies should get their own tax house in order first.

“Politicians love scapegoats,” said the Isle of Man’s Chief Minister Allan Bell. “And the G8 agenda is being politically driven because there’s always someone else to point a finger at.”

There is no universally accepted definition of a tax haven, but international bodies cite low tax rates and secretive financial systems as the major characteristics.

Foreign-owned companies pay no corporation tax in the Isle of Man, but the island has recently signed tax information sharing agreements with the UK, US and European countries.

Mr Bell said that when it comes to tracing who actually owns some of the world’s more secretive bank accounts, the Isle of Man is a decade ahead of other larger countries especially the UK and the US.

He also accused President Obama of double standards, given that the US federal government has no direct control over the tax policies of individual states.

That is especially relevant when it comes to the tiny US state of Delaware which has only 900,000 citizens but over a million registered companies – most of which are “brass plate” entities controlled by very private entities or individuals.

“We just want a level playing field when it comes to tax transparency,” said Mr Bell.

“It’s totally selfish from the USA because they want to track down their own tax evaders overseas, without looking at Delaware.”