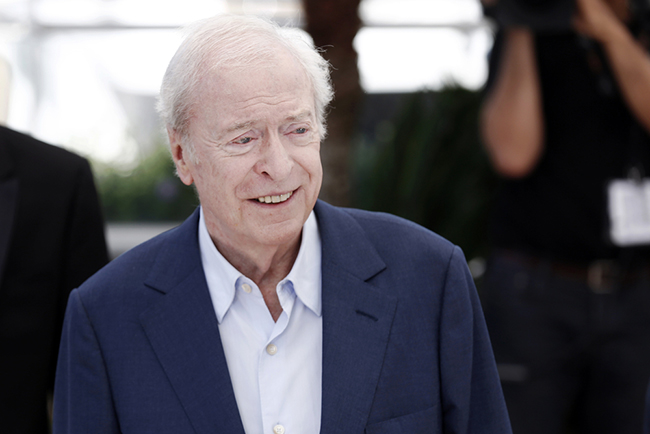 Hollywood star Sir Michael Caine said today he is ‘certain’ Britain should leave the EU – spawning a series of supportive memes from politicians and the public.

The Zulu and Batman star said he would vote for a Brexit because the UK ‘cannot be dictated to by thousands of faceless civil servants’ in Brussels.

David Cameron was asked about it in Prague today – but would not be drawn on the much-loved actor’s words saying: ‘Everyone will have to make up their own mind’.

Ukip leader Nigel Farage today welcomed his call for a Brexit and said: ‘Let’s blow the bloody doors off’ – a famous Caine line from the Italian Job.

Many more posted classic lines and pictures from his long career celebrating his intervention.

MEP Daniel Hannan used a picture of the 82-year-old clutching a shotgun in Get Carter with the caption: ‘My name is Michael Caine and I’ve had enough of being told what to do by faceless Eurocrats’.

You were only supposed to be a bloody common market! @vote_leave pic.twitter.com/jin2qD3rVP

I welcome @themichaelcaine‘s support for #Brexit. Let’s blow the bloody doors off! https://t.co/uTIYyeRGA8

Others praised ‘Britain’s greatest movie star’ for his ‘straight talking’.

Sir Michael piled pressure on David Cameron today as he called for a Brexit.

He said: ‘Unless there is some extremely significant changes, we should get out.’

The actor also dismissed claims that Britain would struggle without the economic power of the EU, saying it could be ‘scary’ but Britons would ‘work harder and try harder’ to be a success on our own.

Mr Caine’s intervention is a huge boost for the Out campaign and his is the biggest name to speak out in favour of cutting ties with Brussels.

Sir Michael told the BBC: ‘To me, you’ve now got in Europe a sort of government-by-proxy of everybody, who has now got carried away.

Pressed on his preference, he said: ‘I sort of feel certain we should come out.’

‘Well, OK, so you fail. Get better, work harder, try harder and you’ll be a success. But you cannot be dictated to by thousands of faceless civil servants who make these rules.

‘Then they argue about it financially but we buy more from them than we sell to them.’

Sir Michael, who has said in the past that he has no fixed party allegiance and voted for Margaret Thatcher, Tony Blair and David Cameron, said his rise from a working-class background to Hollywood millionaire gave him a rare perspective.

‘I’m a middle-of-the-road politician. I have been poor, I have been on the dole, I have worked in factories and I am a multi-millionaire, I have paid heavy taxes. So I know every problem from every angle and not many people are like that.

To me, you’ve now got in Europe a sort of government-by-proxy of everybody, who has now got carried away. I sort of feel certain we should come out

‘The last time I queued up for benefits, Sean Connery was two guys in front of me.’

In a wide-ranging interview the 82-year-old also said that he would star in a film about the Hatton Garden heist ‘in an instant’.

A film about the raid is reportedly in the works, with scriptwriter Simon Cluett hinting that he would like to bring Sir Michael, Terence Stamp or Ray Winstone on board.

Sir Michael, 82, said: ‘I read the paper today about the Hatton Garden robbery, and everyone’s suggesting that I do the film with Ray Winstone. And I would do it in an instant.’

The Hatton Garden Safe Deposit raid saw valuables including gold, diamonds and sapphires worth up to £14 million stolen when the gang of ageing burglars drilled their way into a vault at the heart of London’s jewellery quarter. The thieves were aged 75, 67, 58 and 75.

Sir Michael gave his backing to Tory policy in 2010 when David Cameron launched plans to sign up teenagers for civilian national service.

The Tory leader said every 16-year-old would get the chance to join a National Citizen Service, which will send youths from all backgrounds on summer camps to train them for community projects.

In a coup for the Conservatives, Sir Michael – who was once a teenage gang member in South London – said the programme could help ‘save’ members of Britain’s ‘forgotten’ young generation.