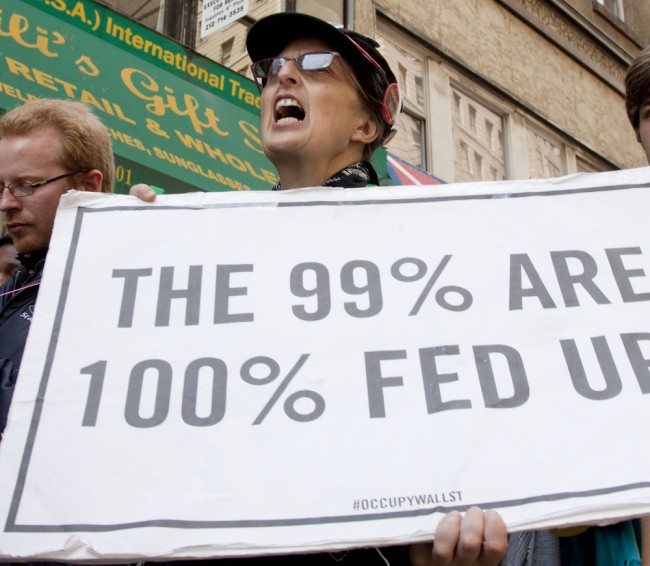 The Guardian says that a report by five IMF economists dismissed “trickle-down” economics, and said that if governments wanted to increase the pace of growth they should concentrate on helping the poorest 20 per cent of citizens.

The study – covering advanced, emerging and developing countries – said technological progress, weaker trade unions, globalisation and tax policies that favoured the wealthy had all played their part in making widening inequality “the defining challenge of our time”.

Echoing the frequent warnings about rising inequality from the IMF’s managing director, Christine Lagarde, the report says governments around the world need to tackle the problem. It said: “Raising the income share of the poor, and ensuring that there is no hollowing-out of the middle class, is actually good for growth.”

The study, however, reflects the tension between the IMF’s economic analysis and the more hardline policy advice given to individual countries such as Greece, which need financial support.

During its negotiations with Athens, the IMF has been seeking to weaken workers’ rights, but the research paper found that the easing of labour market regulations was associated with greater inequality and a boost to the incomes of the richest 10 per cent.

“This result is consistent with forthcoming IMF work, which finds the weakening of unions is associated with a higher top 10 per cent income share for a smaller sample of advanced economies,” said the study.

The study said there was growing evidence to suggest that rising influence of the rich and stagnant incomes of the poor and middle classes caused financial crises, hurting both short- and long-term growth.

“In particular, studies have argued that a prolonged period of higher inequality in advanced economies was associated with the global financial crisis by intensifying leverage, overextension of credit, and a relaxation in mortgage-underwriting standards, and allowing lobbyists to push for financial deregulation,” it said.

It added that pretax incomes of middle-class households in the US, the UK, and Japan had experienced declining or stagnant growth rates in recent years. Additional pressures on the middle class reflected a declining share of labour income – the predominant source of income for the majority of households.

Inequality could lead to policies that hurt growth, the IMF study said, noting that it could it could cause a backlash against growth-enhancing economic liberalisation and fuel-protectionist pressures against globalisation and market-oriented reforms. “At the same time, enhanced power by the elite could result in a more limited provision of public goods that boost productivity and growth, and which disproportionately benefit the poor.”

The paper called for extra investment in health and education policies that reduce poverty, and more progressive taxation. “Fiscal policy already plays a significant role in addressing income inequality in many advanced economies, but the redistributive role of fiscal policy could be reinforced by greater reliance on wealth and property taxes, more progressive income taxation, removing opportunities for tax avoidance and evasion, better targeting of social benefits while also minimising efficiency costs, in terms of incentives to work and save.”