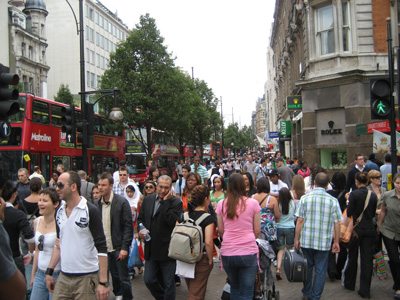 A week in and expectations of a major boost to growth are rapidly being downgraded. There are certainly plenty of overseas tourists in London, but the capital always has lots of foreign visitors at this time of year. Net tourism would be down if the number of potential visitors deterred by horror stories about gridlock and fears about being ripped off exceeded the numbers coming to London for the judo, athletics and beach volleyball. Evidence of half-full hotels suggests this may be the case. An additional issue is the per-capita spend of the two categories of tourists. Someone coming to London to watch sport for two weeks is likely to spend less than someone who hits the shops of the West End and Knightsbridge every day for a fortnight.

The second reason there may be little or no Olympics boost is that Britons appear to be giving London a miss. Some employees have been told to work from home for the duration of the Games, where the temptation to channel surf while Bradley Wiggins or Jessica Ennis is competing may not do wonders for their productivity. In addition, shopping trips to central London appear to have been put on hold, contributing to the stories of empty shops, while the wet weather has led to a last-minute increase in sales of foreign holidays.

All this, of course, is based on anecdotal evidence. Hard evidence of the “Olympics effect” is thin on the ground, although it is known that ticket sales will provide a small boost to gross domestic product equivalent to 0.1% of national output. Fans have been shelling out for tickets over the past year, but the Office for National Statistics methodology assumes that all the spending took place during the Games. The other upside to growth in the July to September period will come from the bounce back from the double bank holiday in June for the Queen’s diamond jubilee. The loss of production from the extra day off is estimated to have shaved 0.4% off growth in the second quarter and, assuming it is all clawed back, should add a similar amount to growth in the third quarter.

So, even without the Olympics effect, output should increase by 0.5% between the second and third quarters.

George Osborne and David Cameron were hoping for a lot better than that. For the economy to register even zero growth in 2012 as a whole output needs to rise 1% this quarter and remain at that level in the final quarter. With central London a ghost town, that looks challenging.