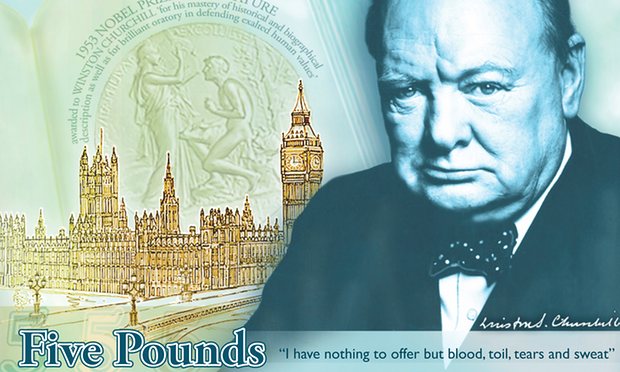 Cash machines across the UK will start to dispense the Bank of England’s first plastic £5 note on Tuesday morning and it is designed to be safer and stronger, reports The Independent.

The new polymer banknotes, featuring Sir Winston Churchill, fit in cash machines like paper ones, but are considerably more durable, cleaner and harder to counterfeit.

A spilled drink should have a little effect on the new notes, which can be wiped clean and will even survive a standard laundry cycle with “minimal damage”.

Each note is expected to last around five years – two and a half times longer than their paper counterparts – because of the durability of the polymer material.

“The use of polymer means it can better withstand being repeatedly folded into wallets or scrunched up inside pockets and can also survive a spin in the washing machine,” Mark Carney, the Bank of England Governor, said.

”We expect polymer notes to last at least two and-a-half times longer than the current generation of fivers and therefore reduce future costs of production,“ he added

Some experts have previously warned that newly made notes could stick to each other because of the polymer-coating, proving irritating for people who might accidently end up paying twice.

“Brand new polymer notes can sometimes stick together, but this effect is short-lived once in use,” the Bank of England said in an official Q&A on the changes.

There are 440 million new fivers printed but it might take a few weeks before it reaches everyone’s wallet as not all cash machines will be ready immediately.

“The Bank of England’s main role is making sure we’ve got enough of the notes and then working with the wholesale cash industry to make sure they spread the notes around the country,“ Victoria Cleland, the Chief Cashier of the Bank of England, told the BBC.

So where are you most likely to find them?

Cleland said customers are more likely to get the note earlier if they live closer to wholesale cash centres which are “near bigger cities and conurbations”.

The old fiver, featuring prison reformer Elizabeth Fry, can still be used in shops until it is withdrawn from circulation in May 2017.

In April, the Bank of England unveiled the design of a new £20 featuring the artist JMW Turner and his painting ”The Fighting Temeraire“ that will enter into circulation in 2020.

The arrival of plastic banknotes means Britain is joining a list of more than 30 countries that already use them. Australia was the first to launch plastic notes in 1988, followed by countries including New Zealand and Singapore.

Two million £5 notes made of polymer plastic were released by the Clydesdale Bank, the largest issuer by volume of notes in Scotland, in March.