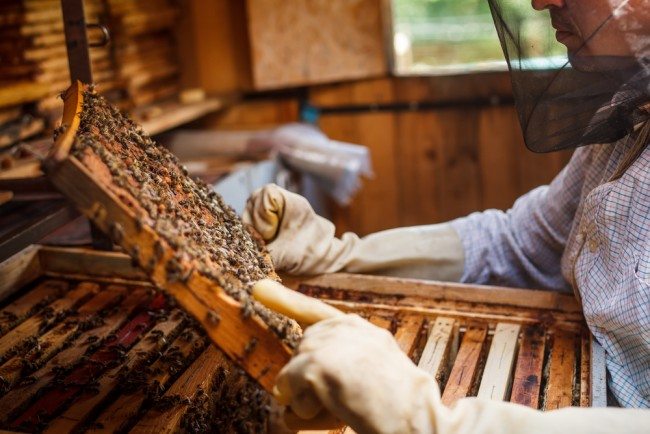 Just Bee, launched by Andy Sugden and Joe Harper in March, secured deals with 20 local businesses in their native Manchester before meeting the buyer from Fortnum & Mason.

“It was the perfect place to launch in London because it keeps hives on the roof,” said Mr Sudgen.

Just Bee is the latest entrant into the fast-growing flavoured water market.

The first-time entrepreneurs have come up with three varieties of drink, all containing honey, to meet the growing demand for all-natural products, and drinks without refined sugars.

The flavoured water business is worth £171m in the UK, according to The Telegraph, and is growing at 15 per cent per year.

According to Selfridges, which has been stocking Just Bee for the past six weeks, sales of alternative water in its foodhall – which includes coconut water and flavoured water – have more than doubled over the past 12 months.

Mr Harper’s beekeeper father, Ron, was the inspiration for the business. “We were talking about how great a natural sweetener honey is but how you never see it in soft drinks,” said Mr Harper. “We also wanted to do our bit to help British bees, which are in decline.”

All the test products were made using Mr Harper Snr’s honey from his four hives in the family garden but the business has already outgrown his supply.

“He said it’s a hobby, he’s retired, and he doesn’t want to go back into full-time work, especially for his son,” said Mr Harper. A blend of honey is now sourced from a Liverpool-based distributor.

Just Bee was predicted to turn over up to £200,000 in its first year but surprise orders could drive up revenues significantly. “We just had a huge order from Google Ireland,” said Mr Sugden. “Our forecasts are changing by the hour.”

Just Bee has pledged to give 10 per cent of its profits to the British Beekeeping Association. The company is also giving away free packets of bee-friendly wildflower seeds from its website.

Mr Sugden and Mr Harper both worked in the business advisory sector for nine years before starting their business. The pair took advantage of the Government’s Growth Voucher scheme last year, securing £5,000 to develop their recipes. They have just booked in their third production run, doubling each order from the original minimum contract of 10,000 units.

“We could branch out into other food and drink products, even health and beauty down the line but we keep having to stop ourselves because we need to walk before we can run,” said Mr Sugden.