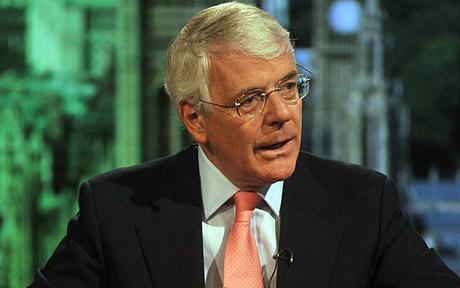 He said falling unemployment and a rising stock market indicated Britain was now on a “slow road to recovery”, reports The BBC.

He said the Conservative Party had learnt regicide was “not a good idea”.

Speaking on the BBC’s Andrew Marr Show on the 20th anniversary of Black Wednesday – the day Britain had to pull out of the European Exchange Rate Mechanism – Sir John said that Britain may already have weathered the worst of the economic storm.

He likened the current economic situation to that of the early 1990s when Chancellor Norman Lamont predicted he could see the “green shoots” of recovery – a comment that was seen as a major gaffe that jarred with people’s everyday experience of falling living standards.

‘Long-running sore’
Sir John said: “Normal Lamont was taken to pieces by commentators for suggesting there were green shoots. But in retrospect we can see that Norman was right.

“There are some oddities in the figures at the moment: Why in the depths of this recession is employment growing? Why is industrial production going up? Why has the stock market risen?

“There are things happening out there that will become apparent and we don’t quite know why or how. My guess – and this is something a minister can’t say but I can – is that in due course we will find that we passed the bottom.”

The former prime minister, who negotiated Britain’s opt-out from joining the euro, said he thought the eurozone crisis would lead to a two-tier Europe – with closer integration for euro members.

He said the process could take up to 10 years and would spark a UK referendum on Britain’s relationship with the European Union.

“What you’re now seeing, out of failure and not success, is the euro core looking to integrate further, much more towards a federal structure,” he said.

“That offers an opportunity for us to clean up one of the long-running sores of British politics, which is our relationship with the rest of Europe.”

Amid speculation that some Tory MPs are unhappy with David Cameron’s leadership, Sir John – who faced questions over his leadership as prime minister – backed Mr Cameron to lead the Conservatives into the next election.

‘Attractive and able’
It was not surprising, he said, for people to be critical of the leadership when “times are tough” and divisions within a party were “an inevitability of politics”.

“I would have thought that if the Conservative Party has learned anything in the last 20 years, it’s learnt that regicide is not a good idea,” he said.

He praised Mayor of London Boris Johnson – whose popularity is seen as having increased following the Olympics – as a “very attractive and able and intelligent politician” who is doing a “supremely good job” in London.

But, he added: “Boris isn’t in Parliament. Boris hasn’t said he wishes to become prime minister – quite the reverse.