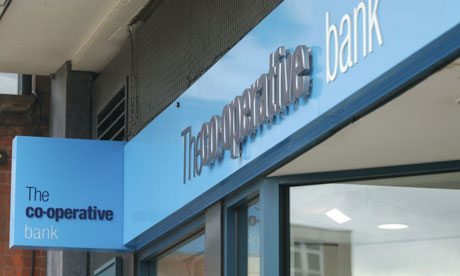 Several American hedge funds are understood to be considering making an offer for The Co-operative Group’s holding as they explore a potential future sale or merger of the business with one of Britain’s growing band of challenger banks.

The Times reports that three sources familiar with the funds said that the Co-op Group holding was regarded as an “overhang” and that removing the mutual from the shareholder register could pave the way for a sale of the bank.

According to the Co-op Group’s accounts, the mutual values its Co-op Bank holding at £224 million and has made clear that it regards the stake as an investment and not a main part of its operations, which span retailing, funeral care and insurance.

“There are a number of shareholders who would potentially be interested in acquiring the group’s shares,” said one US hedge fund manager with a holding in the bank.

Under an agreement struck at the time of the Co-op Bank’s bondholder bailout, if the Co-op Group stake fell below 20 per cent, the lender would lose the automatic right to use its former parent’s brand name. However, the bank would be able to tear up an ethical charter drawn up to govern the business after its bailout, although it is unlikely that it would want to risk upsetting customers by doing this.

Regarding a sale or merger of the bank with another challenger lender, one leading Co-op Bank shareholder, who asked not to be named, said that there was interest among investors in talking to TSB, the lender that was spun out of Lloyds Banking Group last year and was bought this year by Sabadell, the Spanish banking group.

A tie-up with TSB would mark a twist in the Co-op’s fortunes, because it would come two years after the lender was forced to abandon the acquisition of the 631-branch TSB weeks before the discovery of a £1.5 billion black hole in its finances. The financial difficulties led to the Co-op ceding control to a consortium of debt investors led by several American hedge funds.

“Sabadell and TSB are to us one of the most logical partners and we would hope to see some kind of progress in the next 12 months,” a United States-based hedge fund manager, who asked not to be named, said.

Another Co-op Bank investor said: “If the plan is to stick with a flotation, we’re going to have to wait a couple of years, whereas a trade sale could happen far sooner. I think there are real economies of scale to a deal with TSB.

The British authorities probably would welcome a merger of the banks because the government is keen to encourage the growth of challengers to Britain’s four big high street banks. George Osborne was a strong proponent of the Co-op Bank’s original takeover of the Lloyds branches and a revived deal more than likely would be looked on favourably by the Bank of England.

Since being rescued, the Co-op Bank has shrunk and is on course to close more than 100 branches as its management team tries to cut costs and turn around the business. The lender is spending hundreds of millions of pounds developing a new IT system.