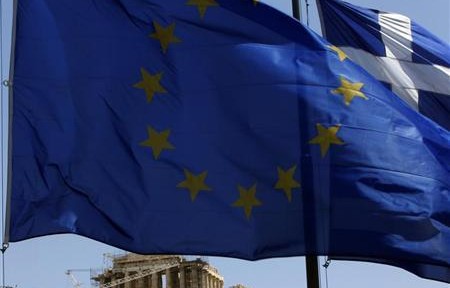 The beleaguered country will have to refinance billions of euros worth of government bonds in less than a month and requires international assistance — which may not be forthcoming — to repay the money.

International inspectors arrived back in Greece on Tuesday to assess the country’s austerity programme with European officials warning that it was “hugely off track” reports The Telegraph.

David Cameron is now receiving daily written updates on the deteriorating situation and was warned earlier this week that a Greek bankruptcy in the next month is now a serious possibility.

Official economic figures to be published today are expected to show that Britain suffered from a third successive quarter of negative economic growth — suggesting that the country is still in recession. If the figures are negative, it will be the longest double-dip recession for more than 50 years.

Ministers are expected to blame the continuing economic turmoil in Europe for this country’s failure to recover from the last slump.

“The daily analysis of the situation is filled with doom and gloom. Spain is in turmoil and Greece may run out of money by Aug 20.”

The crisis has dropped down the political agenda in this country, but behind the scenes it is still the major issue facing Whitehall officials and the Prime Minister as problems once again come to a head.

International Monetary Fund experts arrived back in Greece this week but may be reluctant to authorise the release of further funds to the new government without seeing evidence that the country’s austerity programme is progressing.
There are also growing fears that Spain will soon need a full-scale bail-out after its government borrowing costs rose above seven per cent this week. Reports in Spain on Tuesday said the country had not ruled out leaving the euro.

The cost of Italian borrowing has also risen to the highest level since Mario Monti took over from Silvio Berlusconi as the country’s prime minister last autumn.
On Tuesday, credit ratings agency Moody’s warned that it may cut the creditworthiness of Germany amid renewed concerns it will have to bail out southern European countries.

The eurozone crisis is entering a dangerous new phase as most European leaders are preparing for lengthy summer breaks. Mr Cameron is expected to be on holiday on Aug 20 and now faces the prospect of a second successive interrupted summer break.

On Tuesday, Ed Miliband, the Labour leader on a visit to Paris to meet François Hollande, the new French President, suggested that an emergency European summit may be necessary.

Mr Miliband said: “I think it is very, very important for countries to work together not just at each summit but between summits. It is a grave and urgent situation we are seeing in Europe and it can’t simply wait until the next summit in October.”

Spain is now widely expected by City experts to require a full-scale international bail-out, following the recent assistance offered to its banks. “It’s a desperate situation they’re in and markets are slowly closing to them so I don’t think there’s much doubt they’ll need an international package at some point soon,” said Robin Marshall, a director of Smith & Williamson Investment Management.

European officials said yesterday that a visit to Greece by international inspectors was likely to conclude that the country was unable to repay its debts, despite a previous restructuring programme. The IMF and EU are likely to face trying to renegotiate the deal with Greece, a move likely to be resisted by some countries.
“Greece is hugely off track,” said one European official. “The debt-sustainability analysis will be pretty terrible.”

“Nothing has been done in Greece for the past three or four months … the situation just goes from bad to worse, and with it the debt ratio.”