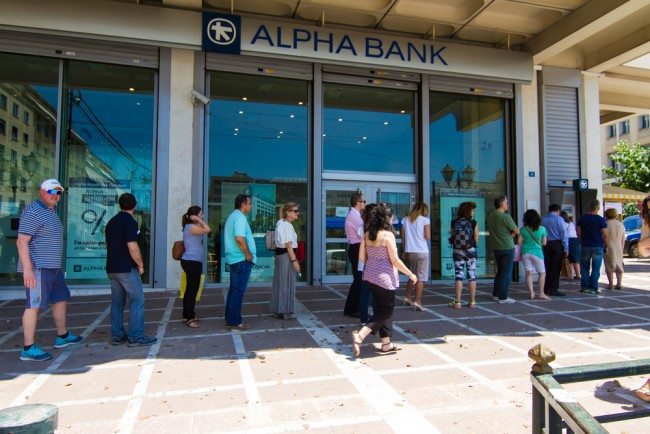 Athens was able to make a €6.8bn payment to the European Central Bank, International Monetary Fund and the Bank of Greece on Monday, avoiding a debt default and ensuring the country will stay afloat until at least the end of the month.

According to The Telegraph, the payment was made after a €7.18bn bridging loan was released by the Europe’s rescue fund, the EFSM, following an agreement to use the facility was struck last week.
Greece is now no longer in arrears with the IMF – 20 days after it became the first ever developed world debtor to default on the Washington-based fund. The payment paves the way for the IMF to disburse up to €16bn to the cash-strapped country as part of a third bail-out programme.

“The fund stands ready to continue assisting Greece in its efforts to return to financial stability and growth,” said IMF spokesman Gerry Rice.

However, the prospect of a debt default and possible Greek exit from the eurozone has not faded, warned analysts. Greece still needs to find another €5bn for its creditors in August.

The country’s banks were able to re-open three weeks after the imposition of capital controls. Greeks remain limited to withdrawing €420 a day and the country’s markets are due to remain shut until at least Wednesday.

Customers still lined up outside banks to deposit cheques, access safety deposit boxes and withdraw money from within branches. Most transfers abroad are still prohibited.

Negotiations over a third bail-out worth €86bn are due to formally begin once the Greek parliament crosses another legislative hurdle later this week.

MPs need to pass laws reforming the country’s public administration and begin implementation of an EU directive on bank failures on Wednesday. Prime minister Alexis Tsipras will again have to fight down a rebellion in his Leftist Syriza party, a week after more than 38 of his MPs rejected a raft of tax and pensions reforms. Mr Tsipras needs at least 121 MPs to pass the measure to avoid triggering a vote of confidence in his leadership.

Greek lawmakers will have to ratify the EU’s Bank Resolution and Recovery Directive (BRRD), which seeks to protect ordinary depositors from the costs of bank “bail-ins”.

Greek banks have tapped €86.8bn in emergency liquidity assistance (ELA) from the European Central Bank, according to the latest figures from the Bank of Greece.

The ECB is now set to continue incremental hikes of the ELA ceiling after it moved to unfreeze the funds last week.

However, withdrawal limits are likely to remain in place until the end of the year as the financial system faces recapitalisation costs of up to €25bn, according to Mark Wall, chief economist at Deutsche Bank.

“Capital controls will remain in place at least until the banks have been recapitalized,” said Mr Wall.

“Since the resources for bank recapitalisation will be released only when the ESM loan is approved in August/September, it seems likely that the capital controls will last into the fourth quarter.”