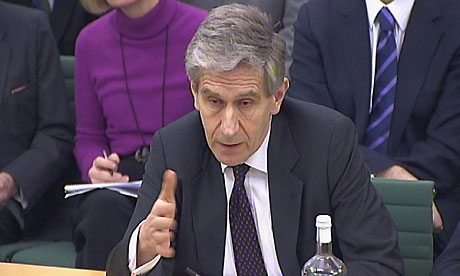 Lord Stevenson, former chairman of HBOS, was accused of being “delusional” and living in “cloud cuckoo land” during heated exchanges with peers and MPs about his £735,000 a year role at the bank, which nearly collapsed in 2008, reports The Guardian.

Stevenson, who has led government reviews and once chaired publisher Pearson, was described as “evasive, repetitive and unrealistic” during Tuesday’s gruelling three-and-a-half hour session with the parliamentary commission on banking standards.

He apologised for the impact of the collapse of the bank, which was rescued by Lloyds and which in turn needed a £20bn taxpayer bailout. During a defensive appearance before the committee at which he refused to acknowledge any problems with the bank’s board, Stevenson said he “felt awful” that the board had failed to foresee the “protracted” closure of the wholesale markets on which the bank relied for funding.

While he admitted the “true level of risk” may not have been appreciated and that there had been “mistaken” lending, the crossbench peer took issue with parts of the damning report by the Financial Services Authority into the bank’s corporate division. The division’s former head, Peter Cummings, has been fined £500,000 and banned from working in the City.

Cummings, who has given evidence to the committee in private due to his ill health, was described by Stevenson as an “open and honest guy who’s had a very tough time”. Cummings is the only former HBOS executive to be banned by the FSA, whose report Stevenson described as “completely shocking”. “I hated it,” he said.

Stevenson, who grew hoarse during the testy exchanges, irritated members of the commission, who include former chancellor Lord Lawson and the new archbishop of Canterbury, Justin Welby, by his insistence that the main problem was the failure to predict wholesale markets would dry up for a year.

He told Welby: “We failed to plan for catastrophe … we were not aware until very late in 2008 that we were suffering from a heart attack.”

HBOS’s loan-to-deposit ratio – a measure of reliance on markets rather than savers to fund lending – had grown from 140% to 196%. “What brought the bank down was the closure of the wholesale markets. The day after Lehman that was it,” said Stevenson, who oversaw the takeover by Lloyds three days after the US bank collapsed.

Lawson said: “You’re living in cloud cuckoo land aren’t you? Reckless growth led you into difficulties.” He accused him of being either “dishonest” or “delusional” for describing the bank as “a highly conservative institution” in a letter to Sir Callum McCarthy, the then chairman of the FSA, in March 2008, days before speculators nearly brought down the bank.

Stevenson eventually conceded that “with the wisdom of hindsight I wished the pace of asset growth” had been slower in 2006. He also insisted that there was no evidence of “reckless” growth.

He pleaded that the inquiry was “testing an ageing” memory of events that took place up to 11 years ago but seeming to contradict himself, later said: “There are very few days I don’t think about it [the collapse of the bank]. I’m extremely sorry that it happened, I’m extremely sorry for the employees that got hit, the taxpayer that got hit and the shareholders who got hit.”

Andrew Tyrie, the Conservative MP who chairs the committee, pressed him repeatedly on whether the lending by the bank, which incurred £26bn of losses on corporate loans, was “competent”. Under pressure, Stevenson said: “There must have been some that was incompetent and most was competent.”

Tyrie told Stevenson that he believed he was “delusional rather than mendacious”. But he concluded: “You’ve been evasive, repetitive and unrealistic.”

Asked if he would be regarded as “fit and proper” by the FSA to run a bank, Stevenson replied: “I don’t know.” He had remained authorised as a non-executive director at private equity company Loudwater until last week.

Stevenson was also taken to task over his assertion that he was a non-executive chairman of the bank after its formation from the merger between Halifax and Bank of Scotland in 2001 until its rescue by Lloyds in 2008. In fact he had told the FSA in a letter in January 2007: “Yes I am part-time (but not non-executive). I am legally responsible for the business.” His pay was unusual for a non-executive chairman as he also had a long-term incentive plan equivalent to his £735,000 a year salary. He told Tyrie he had lost money when the bank’s share price collapsed as he had been buying shares in the runup to its near demise because he believed the shares were “too cheap”.

What Lord Stevenson said to the FSA in January 2008

“I can understand a mind set which regards a ‘non-executive chairman’ as sailing above the battle, not concerned with the detailed day to day realities … Can I make it quite plain that I do not regard myself as that kind of a chairman.”

“Yes, I am part-time (but not non-executive). l am legally responsible … knowledgeable and well briefed.”

What Stevenson said to the FSA in March 2008

(He was responding to an inquiry from the watchdog about HBOS’s position, two days after the collapse of Bear Stearns. HBOS shares were plunging)

“We have had no problems in financing ourselves … even on the hairiest of days.”

“I am not aware of any lurking horrors in our business or our balance sheet. Quite the reverse.”

“How would we fare if liquidity completely dried up, you asked. Does that keep me awake at night? The answer is no!”

What Stevenson said on Tuesday

“It is clear, with the benefit of hindsight, that the bank did become exposed to excessive levels of risk.”

“As a non-executive chairman, I did not experience the executive challenge … first hand.”

“There are very few days I don’t think about it [the collapse of the bank].”

“We failed to plan for catastrophe … We were not aware until very late in 2008 that we were suffering from a heart attack”.

“We failed, along with rest of the world, to anticipate the protracted closure of wholesale market.”

“The worries we had were long-term worries. Had we thought for a moment there would be protracted closure of wholesale markets, we’d have been forced to take action.”