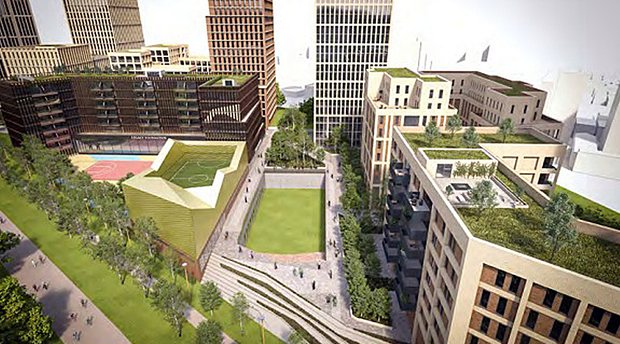 The movers and shakers of the property world will descend upon London’s Olympia next month for the UK’s most prestigious real estate conference, reports The Independent.

Among the investors and developers at MIPIM UK, an offshoot of the annual conference in the French Riviera resort Cannes, will be three famous faces who grew up on London council estates and who now have an ambition to boost the provision of social and affordable housing.

A year ago, former England captain Rio Ferdinand, West Ham United skipper Mark Noble and ex-Brighton striker Bobby Zamora turned up at the conference to unveil their Legacy Foundation – a regeneration charity with a plan to build a series of social and privately rentable housing schemes, backed by private investors.

The stars (all three of whom have played for West Ham) are coming back to present their first project, worth £400m, to build 1,300 homes on a 22-hectare site in a run-down area in Houghton Regis near Luton. The scheme is a partnership with Central Bedfordshire council, which they met at the conference last year, and is being funded by Aviva Investors.

It is not entirely unusual for footballers to get involved in property projects. Ferdinand’s former Manchester United colleagues Gary Neville and Ryan Giggs are currently in a row with Historic England over their plans to knock down an entire block in Manchester’s city centre to build two luxury skyscrapers, a 5-star hotel and a split-level public plaza.

Former Liverpool footballer Robbie Fowler has gone down a rather different route. He runs a buy-to-let property empire stretching from Cardiff to Scotland and even organises masterclasses on how to become a multi-millionaire landlord at £1,000 a head.

The West Ham trio have chosen to focus on social and affordable housing. They want to help tackle Britain’s housing crisis by building thousands of affordable homes across the country, complete with sporting academies where they will offer coaching to youngsters.

Noble, from Canning Town, east London, who started his Hammers career aged 13, said: “At first we were thinking 20, 30 homes, but then we realised that wouldn’t make a difference to anyone. We want to make a big difference in housing.”

He hopes there will be a “sort of domino effect… once one [scheme] gets off the ground and everyone sees how good it’s going to be”.

The plan for the Kingsland site in Houghton Regis has a creche, a leisure centre with a gym and swimming pool and a sports academy, where one of the trio will be training local kids once a month. Other projects might have health centres, where needed. Sport will be at the heart of them – not just football, but also netball and hockey.

The footballers intend to pour some of their own wealth into the project once it has been built. They are expected to put in at least £300,000 every year, equally split between them, to fund management costs, repairs and community leaders’ wages. Noble said it could be more. “We will subsidise the creche, football facility, yoga and art studios, and the gym,” he said.

They have also been attending meetings with council planners and architects and will be visiting the building site regularly.

Kingsland is moving “at a hell of a pace”, according to Jason Longhurst, director of regeneration and business at the local council. The footballers’ scheme hopes to break ground sometime next year and the first residents could move in a year later. “We are helping shape this so it’s a viable model for elsewhere,” Longhurst added.

Noble said the trio wanted to do something longer-lasting than an hour-long appearance at a charity or community event. That means building low-cost homes – each scheme will have 45-50% social and affordable housing – and offering community services such as adult education classes.

“We want to create something special,” said Noble. “I moved seven times in four years in social housing in east London [as a kid]. We know what it feels like. We used to see the ‘no ball games’ signs everywhere. Our motto is to have a sign saying ‘all ball games allowed’.”

Legacy is the brainchild of Ferdinand, who grew up on a council estate in Peckham in south-east London, and will work with his youth services foundation.

Richard Walsh, a director of property agents Colliers International who is providing the property development and financial expertise to Legacy, said McLaren Property would build the homes.

The plans, which are subject to planning permission, envisage 1,297 rental homes at Kingsland, including 546 private apartments and 200 private houses; 400 social and affordable apartments and 200 social and affordable houses. They will all be built to the same specifications, without segregation or “poor doors”. About 450 units will be family homes with three bedrooms or more.

Walsh said he was talking to a handful of investors interested in teaming up with Legacy on future projects. The footballers are already in talks about similar projects with the London boroughs of Barking and Dagenham and Newham, where they grew up.

At Kingsland, the council is forecast to get £16m rental income a year, of which £12m would be paid to Aviva over a 40-year period, allowing the pension fund to recoup the £400m development cost over time.

Walsh admitted that the Legacy model, which relies on the private rental homes subsidising the affordable housing, may not work so well in other areas of the country where rents are much lower than in London. “Rio wants to do something in Manchester, strangely,” he laughed. “Manchester would work yes, but if rental values are not very high it doesn’t work everywhere in the UK.”

Mark Smith, who runs consultancy Affordable Housing 106, gave the move a cautious welcome. But he questioned whether Central Bedfordshire council would not have been not better off selling the land at low cost to a housing association, now known as a registered provider, which would have built 100% affordable housing on a not-for-profit basis.

Walsh said, as a charity, Legacy would not make a profit from Kingsland. McLaren is taking the development risk and is funding the architects and planning process to the tune of £10m. In return, the developer will attempt to make a profit “but this is impossible to quantify until planning is achieved and a build contract signed.”