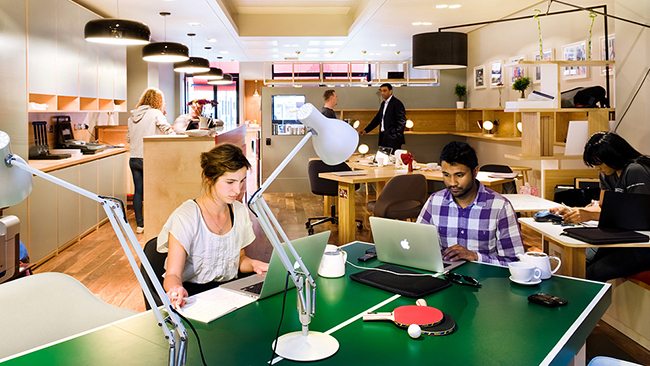 The seven-year-old business, which works with partners such as British Land to establish workspaces in desirable areas, is hoping to open sites in France and the US, founder James Layfield told the Telegraph, although the increased competition in the sector means the locations will remain secret until the deals are complete, reports The Telegraph.

“We are going to open quite a few sites outside the UK,” said Mr Layfield. “We’re in discussions with cities in France and in the US, New York to be specific. But growth is going to remain smart and sensible.”

The move will pit the London-based firm against American rival WeWork, which now has 50,000 members across 78 locations in 23 cities in the US, Europe and Israel. “Compared to that, we’re small beans,” admitted Mr Layfield. “We’ll turn over £10m this year.”

Despite being two years younger than Central Working, WeWork has become the market leader by expanding swiftly across the globe. “We won’t be popping up everywhere just to drive up our valuation,” Mr Layfield said, alluding to the news that WeWork is now worth $15bn (£10.5bn). “Everyone loves an exciting growth story but there’s a lot of hype in the market about these companies with crazy valuations.”

The Financial Times recently criticised WeWork’s hefty price tag, stating: “WeWork’s office space of some 5m sq ft in total is worth $3,000 per square foot, more than even the highest-class towers in New York.”

Central Working currently has six workspaces in London and one in Manchester. The company has just announced a new site in London’s Paddington, which is being brought to market in partnership with British Land, and is now building a new innovation centre in Cambridge, at the behest of Cambridge University: “It’s in the centre of Trinity Science Park and will be home to 750 businesses,” Mr Layfield said.

The £10m-turnover business works with growing companies of all sizes, from cloud communications start-up Twilio, which has gone from one person to 60 staff across two Central Working locations in one year, to Microsoft Ventures, which is also based out of the collaborative workspace.

“There is now the realisation that there’s an alternative to a five-year lease,” said Mr Layfield. “Before we started seven years ago, the word ‘co-working’ didn’t exist but now we’ve proved the model works.”

Central Working takes on upmarket sites of between 30,000 and 40,000 sq ft and pays up to £150 per sq ft. “We need to make sure our office space is superior to what these firms could afford on their own,” said Mr Layfield. “It costs us millions in investment.”

The company, which is profitable, has self-funded all its growth to date and aims to have 10 locations within the next three years. In contrast, WeWork has raised $1.43bnin growth capital across seven rounds, according to data on Crunchbase.

“It would be easy to run at this and create a crazy growth story but then not be around in a few years time,” Mr Layfield claimed. “We would rather have something sustainable.”