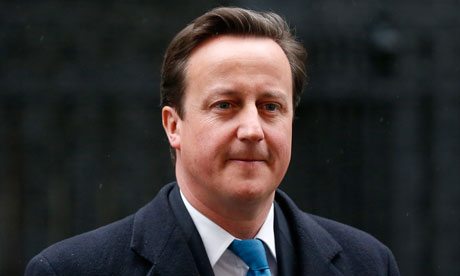 The prime minister has said the UK is “perfectly entitled” to demand change, reports The BBC.

Billions of pounds in taxes could be lost, they told the Financial Times.

Mr Cameron is due to make a long-awaited speech on the UK’s future role in the EU later this month, with some Conservative MPs calling for a referendum on whether to stay in or leave.

Many others are demanding a fundamental renegotiation of the relationship, given the further integration of economies within the eurozone, of which the UK is not a part.

‘Very careful’
Appearing on BBC One’s Andrew Marr Show on Sunday, Mr Cameron said: “What that means is they are changing the nature of the organisation to which we belong. And so we are perfectly entitled, and not just entitled but actually enabled, because they need changes, to ask for changes ourselves.”

A number of Conservative MPs, and the UK Independence Party, want a referendum on whether or not the UK should stay in EU.

But Mr Cameron, who is due to set out his plans in more detail in a speech later this month, said it would not be “right” to leave the EU, as its members accounted for half the UK’s trade.

Mr Cameron said any referendum, if one was needed, would take place within the next five years, and promised Conservative supporters a “real choice” over Europe at the next general election.

But, in their letter to the FT, the business leaders argue that, if the UK left the EU, it could spend 10 years trying to renegotiate the type of trade deals achieved by the 27-member organisation, which could “seriously damage our world-leading exports” of legal and financial services.

They concede that the European Working Time Directive – which limits hours – and the EU budget need reform, adding: “But equally, we must be very careful not to call for a wholesale renegotiation of our EU membership, which would almost certainly be rejected.

“To call for such a move in these circumstances would be to put our membership of the EU at risk and create damaging uncertainty for British business, which are the last things the prime minister would want to do. We need a strong reformed EU with Britain at the heart of it.”

The leaders include Sir Martin Sorrell, chief executive of advertising giant WPP, which recently moved its headquarters back to London from Dublin, reversing a move it made for tax reasons in 2008.

They warn that £25bn of annual UK tax revenue is estimated to be “vulnerable” if the country secedes from the EU, as it comes from businesses with “mobile activity easily moved out of the UK”.

They describe the EU as the “most powerful trading bloc in the world”, adding that the US is “keen to see a strong UK in a strong Europe, fearing a weaker Britain on the sidelines of a more protectionist EU”.

As part of a series of EU reforms partially aimed at protecting the euro, the European Central Bank will be directly supervising around 200 of the largest European banks from 2014 – but will have the right to intervene if smaller lenders are in trouble.

The UK government is reviewing the repatriation of some powers from the EU.