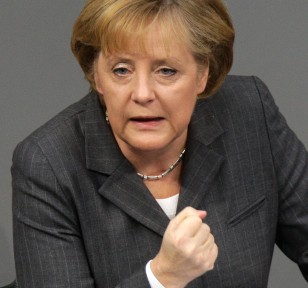 The German Chancellor’s comments were met with applause as she briefed MPs from the Free Democrats party, her junior coalition partner, at a private meeting on Tuesday reports The Telegraph.

One official told AP that the crowd “reacted with applause to hearing that the Chancellor does not want a joint debt liability,” while one participant reportedly shouted: “We wish you a long life!”

Several eurozone leaders, including French President Francois Hollande and Italian Prime Minister Mario Monti have called for the 17-nation bloc to draw-up plans to issue jointly-guaranteed debt in order to reduce borrowing costs for struggling eurozone nations.
Yields on benchmark 10-year government debt are currently at 6.8 per cent in Spain, and 6.15 per cent in Italy. Long term borrowing costs above 6 per cent are widely viewed as unsustainable in the long term.

Ms Merkel this week played down expectations of a major shift in policy from Germany at the EU summit, which starts on Thursday, and repeated that eurozone bonds would be “economically wrong and counterproductive”.

“When I think of the summit I feel concerned that yet again we will have too much focus on all kinds of ways of sharing debt,” she said.

A German government spokeswoman declined to comment on Merkel’s reported remarks. Mrs Merkel is set to address Parliament in Berlin on Wednesday, a day before the summit of EU leaders in Brussels is set to debate new strategies to tackle the bloc’s debt crisis.