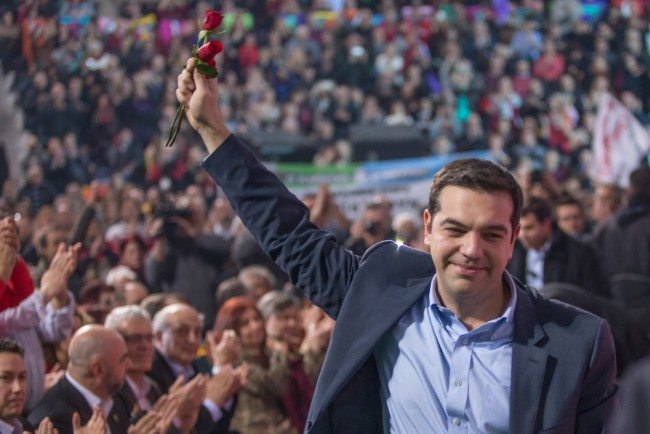 Greece’s embattled prime minister has refused to back down over a referendum on the country’s bail-out future, despite being threatened with imminent financial ruin and a banking collapse as early as Monday if he chooses to press ahead with the vote.

In his third address on national television in the past five days, a characteristically defiant Alexis Tsipras vowed to let the Greek people have their say on the austerity terms they will need to sign up to in order to retain their 14-year membership of the single currency, The Telegraph reports.

Mr Tsipras is backing a “No” vote, a move that has drawn opprobrium from across the continent and been described as “dumb” by a senior ally of Germany’s Angela Merkel.

“Come Monday, the Greek government will be at the negotiating table after the referendum, with better terms for the Greek people,” said Mr Tsipras.

Wednesday was the first day in five years that Greece has not been subject to a bail-out programme, locking the bankrupt country out of €15bn in rescue funds.

The government has been forced to impose draconian controls on cash withdrawals and shut down the banks for more than a week to prevent a devastating bank run. Branches are due to open again on July 7 after the referendum vote is held.

But creditor powers are now threatening the country with imminent financial collapse unless Mr Tsipras calls off the plebiscite.

Slovakia’s finance minister, Peter Kazimir, made clear the ultimatum that was now facing Athens: “I’m afraid that Greece’s banks might not reopen with the euro as the currency in case the referendum on Sunday ends with a No,” he said.

Greece’s paymasters are incensed by the government’s backing for a ‘No’ (‘Oxi‘ in Greek), accusing Mr Tsipras of holding a vote on whether Greeks want to ultimately stay in the currency zone.

Yanis Varoufakis, the finance minister, took to his blog on Wednesday night to lay out whyy the Hard Left government would continue to call for a ‘No’, strengthening its hand to agree more favourable bail-out terms.

“Greece will stay in the euro. Deposits in Greece’s banks are safe. Creditors have chosen the strategy of blackmail based on bank closures,” said Mr Varoufakis.

The European Central Bank decided to maintain the current €89bn cap on emergency funding that it is providing to keep the banking system afloat. It also made no decision on the collateral it requires from banks to access these funds, providing some welcome relief for domestic lenders whose solvency is deteriorating.

Moody’s became the third rating’s agency in three days to downgrade the Greek government after the referendum was called. They estimate that more than €8bn has been withdrawn from banks in the last two weeks alone.

This unsustainable rate of deposit flight makes it highly unlikely the banks can open after the mandated bank holiday ends next Tuesday, say analysts. Should Greece vote ‘No’ on Sunday the ECB is almost certain to continue its funding freeze indefinitely prolonging capital controls.

Mr Tsipras’ dogged resistance is likely to further anger European leaders, who spent their third consecutive day refusing any dialogue with his government.

“We see no grounds for further talks at this point,” said Jeroen Dijsselbloem, the president of the Eurogroup of finance ministers, after convening their second day of discussions about Athens plans for an ambitious two-year rescue package.

Greece became the first country since Robert Mugabe’s Zimbabwe to default to the International Monetary Fund on Tuesday night.

The non-payment now places the Greece’s precarious financial future in the hands of its creditors. Brussels said, however, it would provide a temporary stay of execution and avoid triggering the “cross-default” clauses on Greece’s outstanding loans to the European Financial Stability Fund.

Mr Tsipras’ fighting address also came after he had a written a letter that seemingly capitulated to his paymasters’ demands to overhaul the pensions system.

But the climbdown was quickly rejected as insufficient by Europe’s largest creditor nation, Germany. Chancellor Angela Merkel told her parliament she was not willing to keep the single currency together at all costs.

“Being a good European doesn’t mean seeking an agreement at any price,” said Ms Merkel.

Mr Dijsselbloem added: “There will be no talks in the coming days, either at Eurogroup level or between the Greek authorities and the institutions on proposals or financial arrangements.