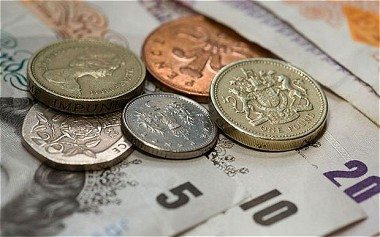 Further falls are expected when markets open in Europe amid concerns that the credit downgrade points to further problems for UK economic recovery.

Ratings agency Moody’s made the downgrade on Friday evening, the first cut since the 1970s.

The value of sterling has been edging down for several weeks following concerns about the worsening outlook for the UK economy and speculation that the AAA rating was under threat.

The government has played down Moody’s move, but Labour described it as a “humiliation” for the coalition, and said ministers must change course.

The pound fell late on Friday after the downgrade, with Moody’s warning that growth would “remain sluggish” over the next few years.

Business Secretary Vince Cable dismissed the downgrade as “largely symbolic”. Mr Cable likened credit ratings agencies to “tipsters” and part of the “background noise we have to take into account”, suggesting they had a “pretty bad record” on economic and corporate forecasting.

He said the US and France had both survived similar cuts to their ratings in the past.

“In terms of the real economy, there is no reason why the downgrade should have any impact… these things do not necessarily affect the real economy but they do reflect the fact that we are going through a very difficult time,” he said.

A weaker pound, while making exports cheaper, is also likely to push up the cost of imports and put upward pressure on inflation.

Shadow chief secretary to the Treasury, Rachel Reeves, said if the downgrading affects the value of the pound people could really start to suffer.

She told the BBC on Monday: “I think the prospect of the pound being weaker is actually very bad news for the economic recovery and very bad news for families who are already struggling with rising gas and electricity prices, rising petrol prices, rising transport prices and for pensioners as well who’ve seen those essentials go up it’s really, really tough for them right now.”