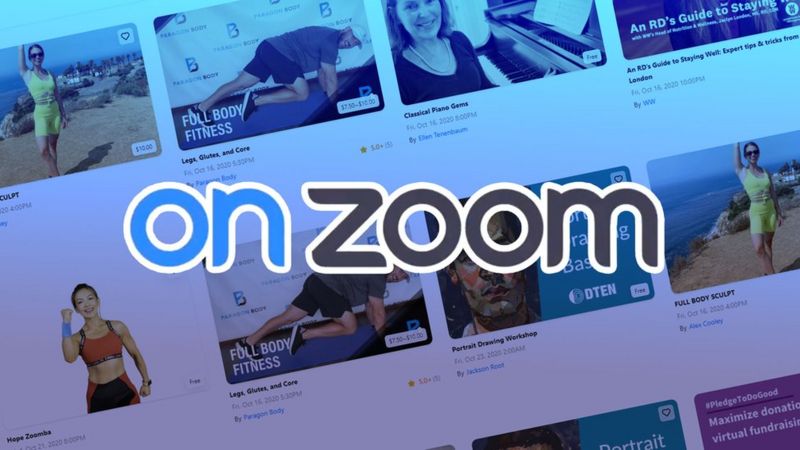 Called OnZoom, the new spin-off platform is launching in beta with live events for fitness, music and art online events.

Tickets can be sold for events with up to 1,000 attendees.

That puts it in a segment of the market between major live-streaming platforms such as Twitch and YouTube, and one-on-one calls.

Joseph Evans, head of technology at Enders Analysis, says the decision comes as things that people used to think had to be done in person have been forcibly moved online during lockdown.

“That has got people very excited about the idea of being able to scale up what were events that were dependent on how many people you could get through your door.

“Now people are thinking that maybe the market for this is actually a lot bigger.”

The initial beta is for US users, with events being promoted on the site for launch priced between free and $50 (£38).

The company said OnZoom was directly inspired by the sudden boom in businesses using its service during lockdown earlier this year.

Among the launch partners is WW – formerly Weight Watchers – which will use the system for its virtual workshops.

Zoom said it could facilitate other classically in-person things such as concerts, stand-up or improv comedy shows, and music lessons.

Technology had previously been a major obstacle to such ideas, Mr Evans said – but Zoom, among others, proved that online classes could work during the lockdown.

And the company has an opportunity for growth.

“Zoom has grown really impressively… but a lot of that usage is unmonetised – it’s free users on 40-minute calls,” he explained.

Building a marketplace means that Zoom can make things easier for those providing the service by centralising the booking and payment systems – and take a cut of the sales.

“That’s the classic tech business model,” said Mr Evans. “Create a marketplace, and then you skim off a bit of the value.

“The big question to my mind is: when things go back to normal, in the long term, is there still the demand for all these sort of [virtual] events?”

But even if it might fail, there was a gap in the market between large-scale live-streaming and private tuition worth exploring, he said.

“Even if there’s a small percentage chance that there’s a large market out there, it’s probably worthwhile.”