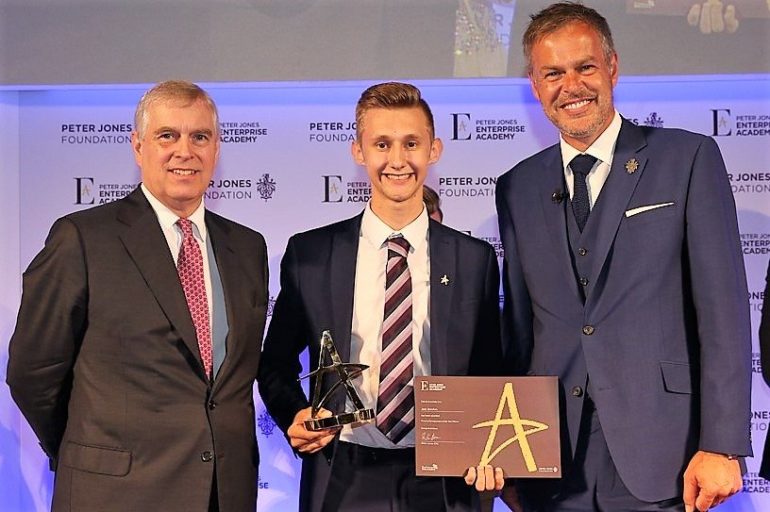 Jack Brookes, an ambitious young entrepreneur from Dudley College was announced as the Peter Jones Enterprise Academy’s National Entrepreneur of the Year in a London ceremony on 5th July 2017.

Eighteen-year-old Jack set up his drone business Swiftshot Airborne Service, which put him ahead of five other young entrepreneurs, who all pitched their business ideas to Peter Jones CBE in June. Jack was presented with a cheque for £5,000 by the Dragon, which will go towards growing his business.

Jack said: “Wow, I can’t believe I’ve won! Just having pitched to Peter Jones was enough to make me feel proud of my achievements, but to know that he believes in me and my business means the world to me.

“Pitching in front of the amazing panel at my age, eighteen, was a great opportunity, as it’s the only one in the country to provide this for people my age. I believe that every young person wanting to be an entrepreneur should go to the Peter Jones Enterprise Academy”

Jack received the award at the Academy’s annual graduation ceremony at Freemasons’ Hall. Students from Further Education colleges across the country came together to celebrate their achievements over the past year, which saw them studying for a BTEC in Enterprise and Entrepreneurship. All graduating students collected scrolls from Peter Jones on stage during the ceremony, which ended with the talented Jack being crowned.

Peter Jones Foundation CEO Jonny Sobczyk, who was on the judging panel with Peter Jones, said: “The competition was tough, as Jack was up against a very talented pool of young entrepreneurs who all delivered outstanding pitches, but we are delighted that Jack has won the top award. His business plan, attitude and personality really impressed the judging panel.”

George Fox from Chelmsford College, also eighteen years old, was awarded ‘Highly Commended’, for his gardening tool invention Ezi Dig. Peter Jones presented George his prize, a Dell tablet, donated by IT solutions company and the charity’s Corporate Patron, Softcat. George will also receive mentoring from Pets Corner CEO Dean Richmond, who was on the judging panel and is a Cornerstone Patron of the charity.

George said: “’I’m so excited to receive Highly Commended for my invention. I will never forget the experience of pitching to Peter Jones and it has given me so much more confidence in my product and in myself.”

The Peter Jones Enterprise Academy, run by the Peter Jones Foundation, is a nationwide network of colleges that deliver specialist courses in enterprise and entrepreneurship. Students are encouraged to set up their own businesses, from which they gain real-life experience of running their very own company.

Jonny Sobczyk continued: “I’m proud of all of the students that graduated this year and have every faith that they will go on to do remarkable things. The day was a fantastic celebration of their achievements during their time with us.”

During the ceremony, the students received a royal visit from HRH The Duke of York, KG, Patron of the Peter Jones Foundation, as well as video messages of congratulations from various celebrities, including James Corden, Jack Whitehall, Holly Willoughby and Michael McIntyre.

Other award winners announced on the day were as follows:

Please see below for the National Entrepreneur of the Year 2017 film: