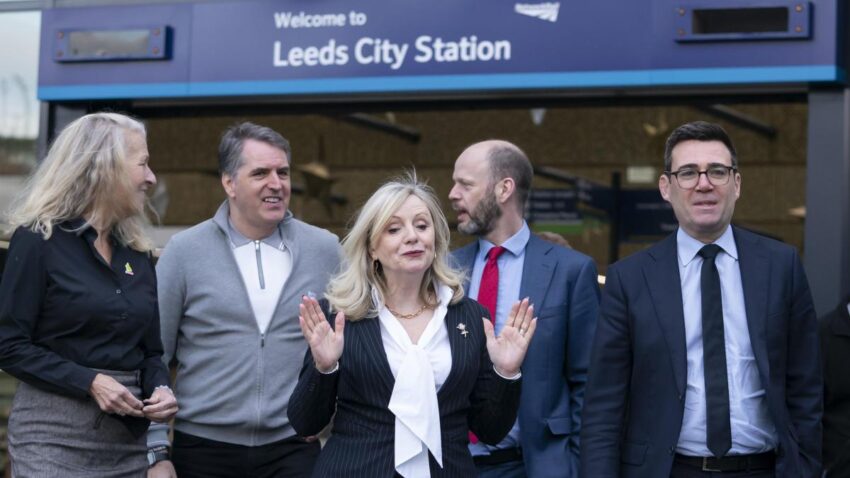 Northern leaders will seek to pay part of the cost of Northern Powerhouse Rail, such is their dismay over “deeply flawed” revisions to the project announced by Westminster last week.

Mayors, council leaders and transport bosses from northern regions expressed anger at the Integrated Rail Plan, which included plans to shelve a new high-speed line from Manchester to Leeds via Bradford, and a stretch from Liverpool to Warrington. The eastern leg of HS2, from the West Midlands to Leeds, was also axed.

Andy Burnham, the Labour mayor of Greater Manchester, said that the rail plan was “deeply flawed”. At a Transport for the North meeting in Leeds, Burnham said that contributions towards the cost of improvements, including completing the Northern Powerhouse Rail network, could be gleaned from rising land values.

“To change the nature of the conversation I would be prepared to consider local contributions or ways of unlocking [them] to improve what has been proposed,” he said. “The motion asks for that process of mediation to see if there are other solutions, particularly around financing, that allows that new line via Bradford back on the table. I don’t believe we can possibly admit defeat on that issue. To do so would be failing generations in the north of England. We would be accepting a smaller economy for the north for the rest of our lives.”

The Integrated Rail Plan was announced by Grant Shapps, the transport secretary, last week, and set out plans for a £17.2 billion investment in Northern Powerhouse Rail. The commitment fell far short of the £42.1 billion that would have been needed for the plans, put forward by Transport for the North, in full.

Burnham highlighted that the building of Crossrail in the south included local contributions. In London property developers must pay into the mayor’s community infrastructure levy to help to fund the project on the basis that such properties would increase in value.

Burnham said: “When you commit to a line, you raise [the] value of some of the land across that line. If you take Bradford, land values would increase in the city centre, and other countries around the world give powers at a local level to capture that value to help pay for the infrastructure.”

The plans were backed by Don Mackenzie, a Conservative North Yorkshire councillor, who earlier criticised Labour politicians for making “well-rehearsed ever more negative statements” about the Integrated Rail Plan.

Hans Mundry, a councillor in Warrington, branded the plans a “mess” and said that construction of high-speed rail should have begun in the north. “None of this delivers what we were promised, it delivers bits and pieces. You’ve had the meal in the south and we can have what’s left on the table.”

Dan Jarvis, the mayor of South Yorkshire, said: “We still want to make the case for the government to do what they originally committed to do.”

Yesterday Dame Diana Johnson, the Labour MP for Kingston upon Hull North, said in the Commons that regeneration of cities such as Hull and Bradford “will be held back for another 20 years, with poor connectivity, small speed and inadequate capacity for passengers and freight”.

Transport for the North was stripped of its funding by ministers last week. Labour described the move as a “Whitehall power grab” after its furious reaction to plans to downgrade Northern Powerhouse Rail.

Johnson said: “By removing Transport for the North’s responsibility for developing [Northern Powerhouse Rail], ministers reduce scrutiny and accountability and show no interest in working in partnership with the north. So when challenged, ministers have decided to stop the criticism by gutting the powers of Transport for the North and centralising to Whitehall responsibility for rebranding the transpennine route upgrade.”

Andrew Stephenson, the rail minister, said: “Transport for the North is not a delivery body nor has it ever been. Their statutory function purely is to develop a strategic transport plan for the north in the same way that Midlands Connect does for the Midlands.”