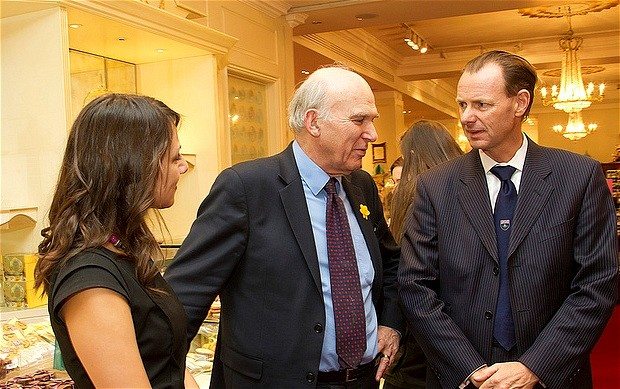 Lawrence Tomlinson, who was brought in to the Business Department to represent entrepreneurs’ interests, fears that banks’ restructuring divisions are taking a “cut-throat” approach to customers.

Companies can be placed in a lender’s turnaround division for breaching a covenant, when they have cash flow problems or difficulties meeting debt repayments, for example.

The bank maps out a “road to recovery” by bringing in external consultants – often one of the big four audit firms – to conduct an Independent Business Review. The cost of the IBR is paid by the struggling business.

Mr Tomlinson, who runs LNT Group, which spans racing cars to care homes, has expressed concerns to Mr Cable that banks are imposing their choice of consultant on companies, leading to conflicts of interest.

He raised the issue after being approached by a number of angry business owners and will include evidence of alleged poor practices in a report on banking competition he is due to hand to the Business Secretary, reports The Telegraph.

Mr Tomlinson accused banks of loading punitive charges on companies to maximise returns and bonuses and of “making directors passengers in their own businesses”.

“The attitude should be, ‘what can I do to help this business recover?’ In fact, it’s ‘let’s take as much from each customer as we can’,” he said.

“How are you helping a business by piling on charges?” he asked. “You end up in a parallel universe where none of the normal rules apply.”

He called for the “unhealthy” relationship between banks and the large auditing firms conducting IBRs to be investigated.

A former banker who worked inside a turnaround division of one of Britain’s nationalised banks told The Daily Telegraph that the “independent” consultants often act under the direction of the lender.

He claimed that IBRs are given to favoured accountancy firms “to give a veneer of independence”. “You would talk [to the consultants] about where you wanted it to be – the bank knew what needed to be done before you put these people in,” he said.

He said staff were given bonuses based on what fees they could charge the troubled firms and are targeted on the equity stakes and assets the lender could take control of.

“The bonuses weren’t, what losses have you prevented? It was all around fee income and upsides. I once charged £30,000 for a £100,000 increase in an overdraft. We couldn’t sign off anything without a fee.

“It didn’t fit with my ethics of how to treat customers fairly.”

The former banker, who asked to remain anonymous, added that banks are often effectively acting as “shadow directors” of the businesses – by telling them which suppliers to pay first, for example.

“You gave instructions but made sure there was no record. But verbally, it was, as directors you should be doing this.”

A British Bankers’ Association spokesman said: “Turnaround units seek to help customers trade out of difficulties [and they have] helped hundreds of businesses. An IBR is exactly that – it is run by an independent company to help develop a ‘turnaround’ plan. Many who go through this process trade out of difficulty.”