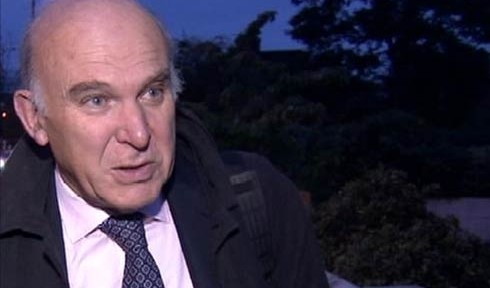 Cable, the second most senior Liberal Democrat in the government, retained his cabinet seat despite the comments he made boasting that he ‘ could bring down the government’ if he was ‘pushed too far’ referring to him having to accede to a number of Conservative led policies  and that he had “declared war” on Rupert Murdoch which referred to his intervention on public interest grounds in News Corporation’s bid for full control of BSkyB.
Cable was called to Downing Street to be told that he will play no further part in the BSkyB decision. He has also lost all responsibility for competition and policy issues relating to media, broadcasting, digital and telecoms which will be transferred immediately to Jeremy Hunt, the Conservative secretary of state for Culture, Media and Sport (DCMS).
A statement, issued by No.10, made clear Cameron’s anger over the secretly recorded comments by the Daily Telegraph. “The prime minister is clear that Mr Cable’s comments were totally unacceptable and inappropriate.”
In a statement later Cable said: “I fully accept the decision of the prime minister and deputy prime minister. I deeply regret the comments I made and apologise for the embarrassment that I have caused the government.”
The prime minister took action after Cable told the two undercover reporters posing as mothers concerned about benefit changes attending his constituency surgery: “I am picking my fights, some of which you may have seen, some of which you may haven’t seen [sic].
“And I don’t know if you have been following what has been happening with the Murdoch press, where I have declared war on Mr Murdoch and I think we are going to win.”
He confided that being in the coalition was “like fighting a war” and that he could use the “nuclear option” of quitting.
Cameron appeared relaxed about Cable’s views on the coalition government, saying only that Cable had “every reason to be embarrassed” by his comments on working in coalition with the Conservatives.
Asked at the press conference whether he was personally embarrassed at Cable’s behaviour, Nick Clegg, Deputy Prim Minister and leader of the Liberal Democrats said: “He himself has said he was embarrassed by the comments he was reported as saying and I can totally understand why he was. End of story.”
Cable’s time as Business Secretary since the coalition government was formed in May has not been without comment, only recently it was announced that he was creating a panel of entrepreneurs and SME business owners to advice his department which was applauded, with the announcement to setup a mentoring scheme with 40,000 business owners advising others across the country being called into question by many.