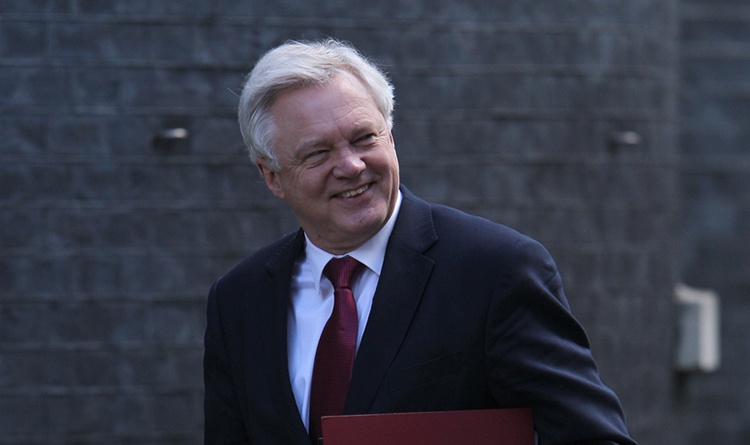 Brexit Secretary David Davis has delivered a speech on the transitional arrangements the UK hopes to negotiate with the EU after it leaves.

This relates to the time-limited period that will come after Brexit day but before the final relationship kicks in.

Davis said that the UK wants to be free to negotiate and agree trade deals with other countries during this period.

He also said that the UK wants to stay in the EU’s existing trade deals with other countries – although there is no guarantee Brussels will agree.

Negotiations have yet to start on what the final relationship will look like between the UK and the EU, including how trade will work across the borders.

The PM has already made clear that we will broadly accept the existing rules and regulations, and ministers agree that although we will officially be outside the Single Market free trade area and the Customs Union, we’ll replicate those arrangements so that industry isn’t dealing with dramatic overnight change.

But the more precise nature of the period between 2019 and 2021 is not that clear. And there is brewing anxiety among Theresa May’s Brexiteer base that what was billed originally as an implementation phase, where we move from one system to another, will be more like two years stuck in aspic.

That’s why the new leader of the influential European Research Group of Tories, Jacob Rees-Mogg, so delighted in taunting David Davis in front of the Brexit committee yesterday, claiming that during that time the UK will be a “vassal state”.

Responding to the speech Mike Cherry, National Chairman at the Federation of Small Businesses, said: “The UK’s 5.7 million small businesses will be satisfied with the Government’s drive for a speedy agreement of a time-limited transition period based on the current terms of access to the EU single market and customs union.

“It is vital that businesses have the certainty that they will only have to manage one set of rule changes as we leave the European Union. A single switch will provide firms with the time needed to adapt and prepare to new arrangements post-Brexit.

“Negotiating the future trading relationship with the EU is of critical importance with 63 per cent of small businesses seeing it as a priority market. However, many firms see the potential and growth opportunities that new trade deals with emerging markets and commonwealth nations can yield. Our research shows how the English language as the global language of trade means that English-speaking nations should be high on the priority list.

“I hope that the European Union agrees with the UK Government and gives them the freedom to be able to negotiate these new trade deals during the transition period. This will help ensure that any new trade agreements are developed robustly and include the right support which allows small businesses to access the full benefits. Every Free-Trade Agreement should include a small business chapter.”

Commenting on the need for concrete government action to allow businesses to get cracking and prepare for any changes Sue Rathmell, VAT Director at MHA MacIntyre Hudson said:

“The government has responded in a characteristically upbeat fashion to the Home Affairs Committee’s warnings around how the Home Office is handling the customs operations side of Brexit. Today’s response states that all departments have been working to develop a detailed understanding of how Brexit will affect existing policies, including all aspects of the border; yet this promises no actual deliverables, concrete action or timetables for implementing changes to current arrangements.

“While the government repeatedly reassures us that every department has been ‘working’, ‘planning’, ‘working on planning’, ‘preparing’ and ‘developing’, there is no sign of when businesses will get notice of what will actually happen on 29 March 2019 and thereafter. There are promises to communicate plans to companies during 2018, but as more time passes, businesses are facing a shrinking window to sufficiently prepare for any changes.

“Any business which brings goods into the UK from the EU, or sends goods into the EU from the UK, must start reviewing how they are going to be affected now. They should seek advice about what customs schemes or supply chain changes might benefit them, assessing their position to apply for Approved Economic Operator status or the range of other authorisations which may be appropriate. While government departments are dilly-dallying, businesses need to get cracking!”