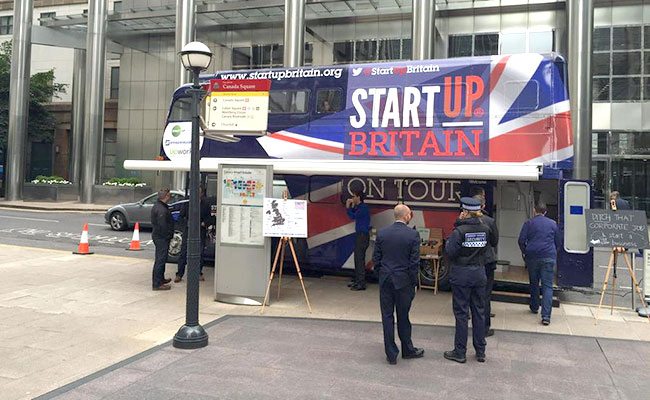 StartUp Britain, a government-backed national enterprise campaign, has kicked off its fourth national tour, aimed at providing inspiration and support to aspiring entrepreneurs.

The campaign was launched in March 2011 to raise awareness of entrepreneurship, in response to the government’s call for an ‘enterprise led’ recovery following the recession. At a time of continued public spending cuts, the government has championed entrepreneurs as crucial to rebalancing the jobs market and to contributing to much-needed economic growth.

Warwick University graduate Yaw Okyere is one of a growing number of university leavers choosing to spurn the corporate route to start his own business. With co-founder Ruth Mukete, he recently launched Coffee Munch, selling energy bars made from dates and oats infused with an espresso shot. The company sources its coffee from the highlands in north-west Cameroon, using only natural ingredients and no added chemicals.

“We started six months ago from our bedrooms, making samples and testing them on friends and family. Now we’re happy with the product we want to scale up,” says Okyere.

Okyere is participating in Startup Britain to get advice about how to take the business to the next level and how to raise money.

The StartUp Britain tour will visit 25 locations across England, Wales and Scotland over the summer months, starting in the capital and ending in Inverness on August 8. Budding entrepreneurs will get lessons in how to build a sales team, a crash course in common pitfalls and how to export their goods and services outside of Britain.

“The country needs to expand its investment to focus on skills and infrastructure beyond the capital. We can’t wait to meet some of the UK’s hottest entrepreneurial talent,” said Lee Perkins, Sage’s managing director.

Speaking about the launch of the latest bus tour Chairman of private Equity company Audere Capital Richard Alvin, a Startup Britain Champion for the Canary Wharf area said:”The bus which is touring locations across the UK is a great place to seek the all important first steps of knowledge to take that kernel of a business idea and make it a reality.

Two years ago onboard in Birmingham I met a designer who wanted to launch a leather goods brand but was struggling to get it off the ground, following his visit to the bus I agreed to work with him and that has led to us forming a company, working together on creating a supply chain and with investment from Audere Capital the brand launches ahead of this autumn with a range of 18 pieces from wallets to a big overnight bag.

Funding is one of the biggest issues for aspiring entrepreneurs. Banks have tightened up their lending to small businesses following the economic downturn, although there are now a number of other funding routes available, from peer to peer lending to crowdfunding.

Startup Britain works in conjunction with the Start Up Loans scheme, a £310m government-funded initiative that provides loans to new businesses. Business owners can borrow up to £25,000 over five years at an interest rate of around 6pc. Prime Minister David Cameron recently said he planned to triple the number of people using the scheme to 75,000 over the next five years.

Danny King, founder and chief executive of educational technology startup Accredible, says there’s never been a better time to start a business in the UK, because of the wide number of funding choices available.

“Raising money has become a lot easier in early stages. Initiatives such as the Seed Enterprise Investment Scheme were game chancing. It means there is very little risk for angel investors backing enterprises. Also the entrepreneurial community is starting to mushroom. More and more people are starting companies, meaning there’s more people available to help you and give advice.”

“We have this big problem in the UK with the branding issue around entrepreneurship. Most people think it’s what they see on TV from the likes of Dragons’ Den and The Apprentice. But that’s a very warped image. Starting a business is an amazing thing for Britain. It’s not only about making money, you’re also trying to make the world a better place and to enhance people’s lives.”