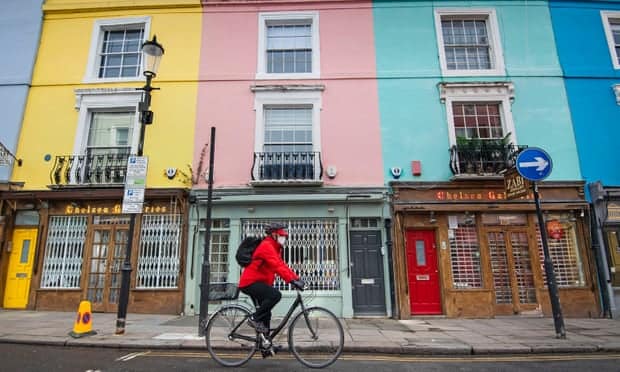 Britons bought 60% more bikes in April as the nation turned to two-wheeled transport during the coronavirus lockdown.

Government advice to avoid public transport and to limit travel to essential journeys led to a complete turnaround in the cycle market. In the first three months of the year, the value of bike sales was down 4% and 8% fewer bikes were bought in the UK, according to the Bicycle Association.

However, in April, the value of sales surged by 57% as the number of bikes sold rose 60%. The biggest change was in more affordable bikes valued at £400 to £1,000, sales of which doubled in April. Sales of bikes costing more than £3,000 fell.

Almost 50% more electric bikes were sold in April, a big step up in the pace of growth from the 29% seen in the first quarter of the year. However, the Bicycle Association said the increase in electric bike sales was disappointing because it was only in line with long-term growth patterns that could be expected for the as yet small market.

Steve Garidis, the association’s executive director, said: “It’s brilliant that the UK has been out buying and repairing their bikes under lockdown. Especially for commuters, every journey made by bike frees up space for those who have no alternative to using public transport. E-bikes have the potential to make even longer or more hilly cycling commutes practical and enjoyable – which is why it’s disappointing that take-up under lockdown hasn’t accelerated as it has for bikes.”

The association wants the government to support e-bike sales with incentives including a £250 buyers grant and promotional campaign.

The latest figures provide more evidence for the switch to two-wheels, which is being underpinned by local and government investment in infrastructure including pop-up cycle lanes.

There have been reports of shortages of affordable bikes, while cycle shops say demand for repairs has leapt as old bikes are dragged out of sheds and garages.

However, one report suggests bicycle sales could fall by 10% to £842m for the whole of this year.

The market research firm Mintel said the switch from public transport and cars to two wheels during the pandemic was likely to be offset by a downturn in consumer spending prompted by the likely recession caused by the lockdown.