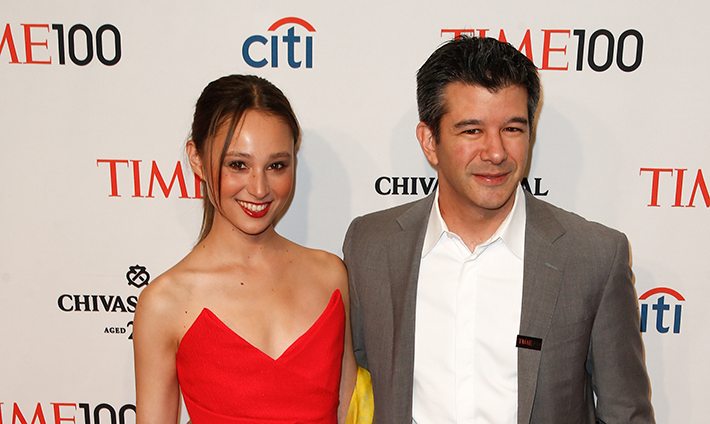 Uber CEO Travis Kalanick took an indefinite leave of absence on Tuesday as a sexual harassment investigation in to the company returned its damning verdict after months of scandal.

In an email to staff, Kalanick said he was taking some ‘time off from the day-to-day’, giving no end to the for widely anticipated hiatus which comes after a hellish period of professional and personal turmoil for the CEO.

He chalked the decision down mostly to giving himself time to grieve for his mother Bonnie, who died in a boating accident three weeks ago on May 26.

‘For the last eight years my life has always been about Uber.

‘Recent events have brought home to me that people are more important than work and that I need to take some time off of the day-to-day to grieve my mother, whom I buried on Friday, to reflect, to work on myself, and to focus on building out a world-class leadership team,’ he wrote.

His decision, though widely anticipated and called for by industry experts, came as; Former attorney general Eric Holder returned a damning, 13-page report into the company’s flaws which included a list of 10 recommendations to fix its culture including a ban on booze at work parties and sex between reporting staff.

Three months after two female former employees aired horrifying allegations of rampant sexual harassment, homophobia and racism which they said was fostered by Kalanick and his entrusted circle of senior executives.

Months after Kalanick was filmed yelling ‘bulls***’ at an Uber driver as he complained about not making enough money after taking the CEO home on Superbowl Sunday.

Holder and a team at Covington & Burling LLP were tasked with investigating claims from female former employees who alleged rampant sexual harassment in February.

The first recommendation on its list of 10 was: ‘Change senior leadership’ with the added index of ‘Review and Reallocate the responsibilities of Travis Kalanick.’

The list also suggested limited alcohol at company parties and banning it entirely during work hours.

‘Uber should take steps to provide clear guidelines about acceptable and unacceptable uses of alcohol and strictly prohibit the use of controlled substances, including prohibiting consumption of alcohol during core work hours and prohibiting consumption of non-prescription controlled substances during core work hours, at work events, or at other work-sponsored events.’

‘Although it is not realistic to prohibit all romantic and intimate relationships in the workplace, it should be emphasized more generally that with respect to such relationships, Uber will not tolerate any form of harassment, discrimination, or retaliation,’ it said.

It will also implement the Rooney Rule, a practice used by the NFL which requires at least one woman and one minority candidate to be interviewed for a position before it is filled.

It also stressed the need for a Chief Operating Officer (COO) to share Kalanick’s workload and enforce the recommendations.

Going forward, senior members of staff will be subject to performance reviews which will assess whether they have adequately followed the report’s guidance.

They will have to commit to boosting diversity and encourage employees to give feedback. The suggestion of an Ethics and Cultures Oversight Committee to enforce the changes was also made.