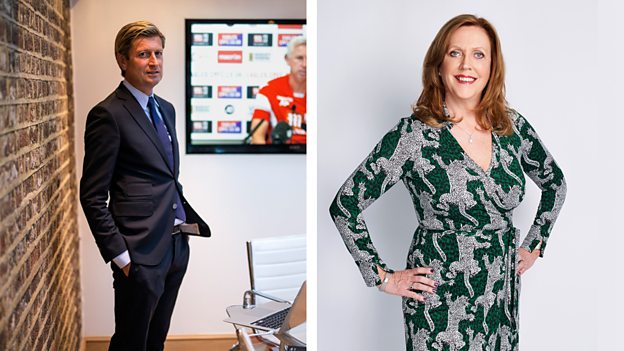 Both Steve and Jenny have first-hand experience of establishing and growing successful multi-million pound businesses. They’ll be adding to the firepower already in the Den, by bringing their commercial knowledge and skills to help them spot the next great business opportunities.

Steve Parish is the former CEO of Tag Worldwide and the part owner and Chairman of Crystal Palace Football Club. Jenny Campbell is the founder and CEO of YourCash Europe, a pan European business providing cash machines to the retail market.

Steve Parish says: “I’m thrilled to become a Dragon and really excited to meet the entrepreneurs in this series, see what ideas they bring to the Den and how I might be able to help them grow.”

Steve left school at 18 and began a career in advertising and computer graphics at Adplates where he founded a technology company called Turning Point Technologies. In 1998 he acquired Adplates and renamed it Tag Worldwide.

Steve turned Tag from a small London based company with 50 staff, and a turnover of under £4m, into a leading advertising production company. Tag boasted a client base of some of the world’s biggest brands, had 3000 employees, 13 offices around the world, and revenues in excess of £180m. Steve sold the business in 2011 for around £150m.

In 2010 Steve acquired the football club he supported from childhood, Crystal Palace FC, where he has been Executive Chairman for the past seven years. Since the acquisition Steve has successfully brought the Club out of administration, into the Championship play-offs, and after winning the play-off final in May 2013, into the Premier League where the Club has enjoyed so far its longest stay. In 2016 Steve lead Crystal Palace FC to the FA Cup final, where they were runners-up against Manchester United.

After leaving school at 16 to begin her working life counting cash in a bank branch, Jenny climbed through the ranks to become one of the few senior female bankers at the time in the UK.

Following thirty years in the banking trade, Jenny left the corporate world in 2006 in pursuit of a new challenge – to turn around a failing cash machine business. Jenny launched a major operational restructure of Hanco ATM Systems, turning it from a business that was making a huge loss in competitive markets to a thriving, profitable entity operating across Europe.

In the midst of the turnaround process and at the height of the financial crash, Jenny was tasked with selling the business. However, she saw that the business had real potential and wasn’t ready to give up on it or the people in it. So she decided to buyout the business and become the majority shareholder – later re-launching it as YourCash Europe Ltd.

Ten years on from taking the business under her wing, Jenny sold YourCash in October 2016 for £50 million.

Previously awarded Business Woman of the Year, Jenny’s favourite business motto is “live by corporate standards, but breathe like an entrepreneur”.