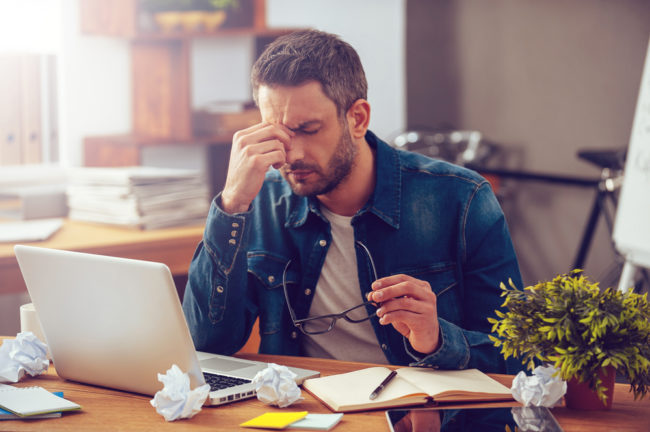 UK employers show a lack of interest in the mental wellbeing of employees, even though many staff are suffering from stress according to a new study.

The research reveals that a third of UK workers say their employer has little or no interest in their mental health, despite the fact that a fifth are stressed out on a daily basis, and for almost a third the issue is so bad that they’re considering looking for a new role.

Mental health issues have risen in prominence in recent years, with high profile figures, such as Prince William and Prince Harry, speaking out to break the taboo around the subject, which affects one in four people every year. Yet despite this shift, the findings indicate that many employers are still brushing the issue under the carpet.

“A certain level of stress is natural, even healthy, in the workplace, but it’s important that it doesn’t get out of hand,” commented Jeff Phipps, Managing Director at ADP UK. “Employees who endure consistently high levels of stress are in danger of suffering from anxiety and even burnout. This can lead to more serious mental health issues, which will impact not only their performance, but also their career, and personal life for a long period of time. It is therefore in the interest of employers to help staff to manage stress and put a safety net in place, before any issues become more serious.”

Workplace stress peaks amongst younger employees, according to the study, with 22 per cent of workers under 35 saying they experience stress every day, and 42 per cent saying that it is so bad, they’re considering jumping ship. This contrasts with only 19 per cent and 26 per cent respectively of those over 35 who feel this way, suggesting employees become better at managing stress as they get older.

The findings also shine a spotlight on the impact of staffing and funding cuts on the healthcare sector, with two in five healthcare professionals considering leaving their role due to stress – the highest of any industry. Healthcare workers are also amongst the most likely to say their employer isn’t interested in their mental wellbeing, a sentiment felt by 35 per cent of respondents, which is only likely to exacerbate the problem.

Phipps continues: “Stress and mental health issues are one of the main causes of employee absence and staff turnover, which means supporting employees isn’t just the right thing to do – it’s also a worthwhile investment. Initiatives should deal with both the causes of stress and mental health issues, but they should also look to improve diversity programmes as a way to support employees. If organisations aren’t catering to diversity, employees’ mental well-being can be impacted if they face particular issues they don’t feel they can raise. Employers should be highly mindful of diversity’s impact and work to create a supportive management culture and a healthy working environment. Employee assistance programmes and occupational health services are also imperative in creating a safe location where employees can go in confidence if they’re facing an issue.”