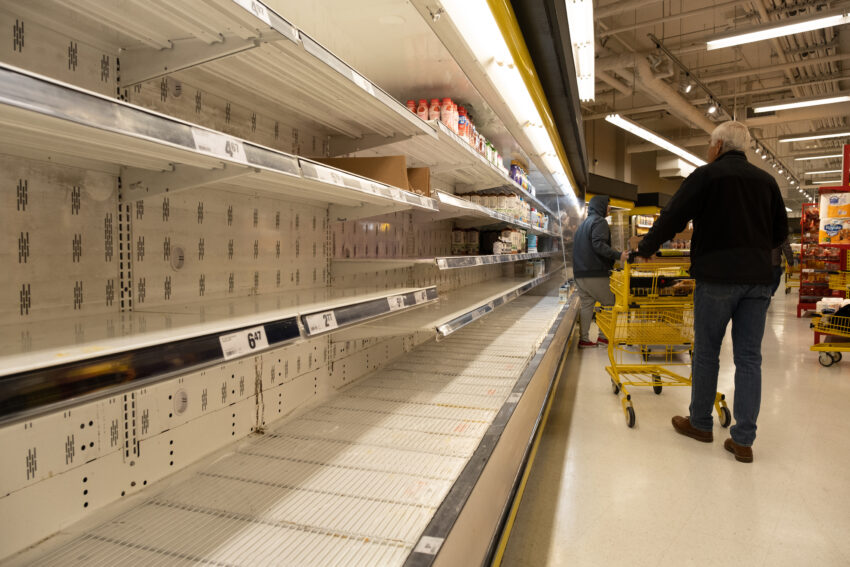 Supermarkets have begun stockpiling groceries in anticipation of a fresh lockdown as the highly contagious Omicron variant of Covid-19 spreads rapidly across the country.

Britain’s largest food retailers are scrambling to avoid a repeat of chaotic scenes from March last year, when they were left unprepared for a wave of panic buying that saw shelves being stripped of everything from dried pasta to baked beans and flour.

“We are budgeting for a lockdown. We’ve been ramping up orders on the 2,000 most commonly bought lines … everything that people tend to buy when they go into that slightly bizarre survival mode,” said a senior source at one of the big four supermarkets.

The boss of another major food retailer said that his company was aiming to hold two weeks’ worth of additional stock than would normally be the case heading into the new year.

“The NHS will be overwhelmed if the government doesn’t lock down … the numbers speak for themselves. We are expecting a lockdown to come in January and we don’t want to get caught out with empty shelves again,” he said.

The rapid spread of Omicron has pushed Covid cases to record highs and stoked fears that the health service could be deluged with patients after households mix over the Christmas break. The Times reported yesterday that government officials were drafting plans for a two-week “circuit breaker” lockdown after the holidays, adding that no decisions had yet been taken.

Supermarkets, which are already said to be enjoying bumper Christmas trading, are bracing themselves for a period of surging demand at a time of potentially widespread staff absences in January, echoing the summer pingdemic that forced thousands of workers to isolate.

“There will be a large build-up of stock this year because supermarkets will be expecting people to stay at home. Customers are likely to be living and working at home in January, so they will be filling up their larders and fridges,” said Ian Wright, chief executive of the Food & Drink Federation.

Last week, the Department for Environment, Food and Rural Affairs is understood to have shared data with representatives from food industry trade bodies indicating that widespread infections would cause significant disruptions to operations in the supply chain during the first couple of weeks of January. One source on the call said that because the spread of Omicron was so rapid, they did not expect the current wave to last as long as previous ones.

While supermarket bosses do not expect a repeat of the frenzied buying of last March, when sales spiked by 50 per cent, they are now facing additional complications in the supply chain caused by shortages of HGV drivers and backlogs at Britain’s ports.

In November, Asda revealed it had chartered its own cargo ship to ensure that toys and Christmas decorations would arrive in its stores. Tesco is now importing fresh food from Europe via refrigerated rail services to help circumvent HGV driver shortages.