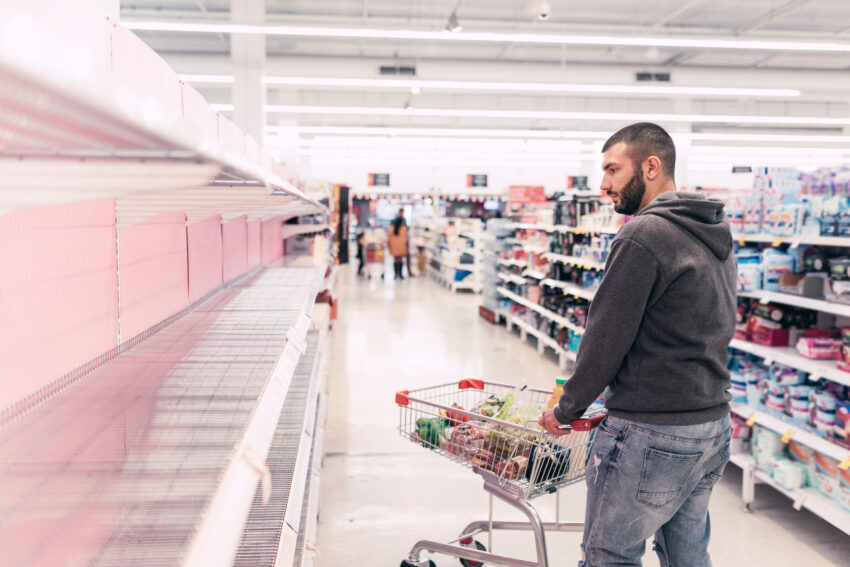 Supermarket chains are trying to secure supplies of carbon dioxide after government talks with a big producer of the gas ended last night without a solution.

Worries about empty shelves are increasing after operations at two fertiliser factories in northern England, which play a key role in the production of CO2, were shut last week because of the rising price of natural gas.

Carbon dioxide is used to stun animals for slaughter and in the food packaging process. Its solid form is dry ice, which is used by supermarkets in chilled food deliveries.

Yesterday Kwasi Kwarteng, the business secretary, was said to have held “constructive” talks with Tony Will, the chief executive of CF Industries, the American company that operates the plants at Ince, in Cheshire, and Billingham, on Teesside. However, the meeting ended without a plan to restart production.

The head of one supermarket chain said that companies were now hunting to find sources of CO2. “Everyone is scrabbling round to secure supply and like in musical chairs someone will be left without a seat. Carbon dioxide is used everywhere,” they said.

Another industry source said that contingency plans were being drawn up to prioritise abattoirs by removing carbon dioxide from products such as packed meats. This would help with slaughtering but could shorten the shelf life of food.

Carbon dioxide is a byproduct of fertiliser manufacture. The CF sites account for 60 per cent of the domestic commercial production of carbon dioxide and 40 per cent of Britain’s fertiliser requirements. They have been closed because of the price of natural gas, which is used to make fertiliser.

The government is thought to be looking at two possible ways of resolving the crisis. The first would involve potentially subsidising gas supplies to CF through price support, to enable its plants to restart production. The second option entails sourcing CO2 supplies from elsewhere. Ministers plan to meet Will again later in the week. A spokesman for the American company declined to comment on the talks.

David Lindars, technical operations director of the British Meat Processors Association, said: “If it takes three days to get the CF factories running again once an agreement with the government has been made then it will be tight and shortages are imminent. The whole supply chain operates on a just-in-time basis, it’s a really fine-tuned machine.

“It’s not good. The government will have to speak to the retailers and prioritise the ones that run out.”

The poultry industry said that the supply of turkeys over Christmas would be affected. Kerry Maxwell, of the British Poultry Council, said: “The fact that the impasse has not been broken is awfully scary and is the last thing we need right now.

“Any given slaughterhouse holds between one and five days of CO2 stock. Currently no deliveries beyond 24 hours are being scheduled so we are literally taking it day by day. There is no doubt Christmas will be affected. We need to know how many turkeys there will be on the ground and that’s just not possible right now. CO2 demand increases at Christmas anyway so this will make it more challenging.”

Warburtons, the baker, was unable to make crumpets in 2018 because of a shortage of CO2, which is used to preserve them. A spokeswoman for the business said: “Even though supply is OK at the moment, we could be saying something very different by Wednesday.”

The threat to CO2 supplies adds to other supply chain problems that are causing disruption for British shops. There is a shortage of lorry drivers after Brexit and the coronavirus pandemic prompted EU hauliers to leave the country.

Andrew Opie, director of food and sustainability at the British Retail Consortium, said: “This could not come at a worse time, with the shortfall of 90,000 HGV drivers already putting severe pressure on food production and distribution. Retailers are working with their suppliers to resolve this issue, but government must investigate this issue as soon as possible and work with industry to ensure a solution is found quickly and problems don’t escalate further.”

A spokeswoman for the Department for Environment, Food and Rural Affairs said: “We are aware of the issues faced by some businesses and are working closely with industry to provide support and advice.”

Ian Wright, chief executive of the Food and Drink Federation, said that shortages would be felt by shoppers imminently. “Towards the end of the week and into the following week we are going to see really serious consequences,” he said.