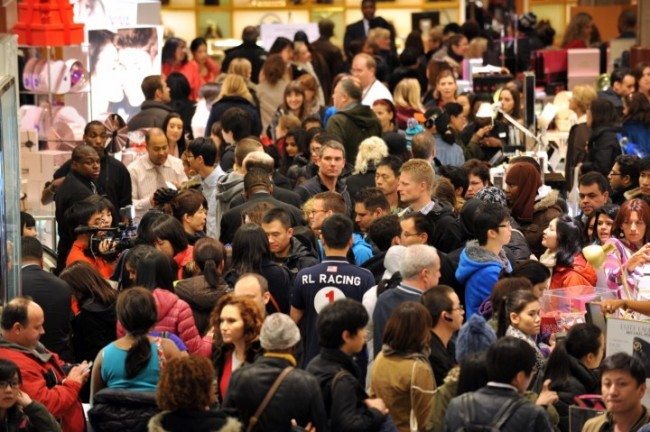 Shoppers tell of being jostled and even stripped of their bargains as stores open at midnight offering discounts, reports The Guardian.

“I got a Dyson but I don’t even know if I want it. I just picked it up,” Louise Haggerty, a 56-year-old hairdresser and waitress, said of her 1am trip to the Black Friday sales. “It was mental in there. It was crazy. It was absolutely disgusting, disgusting.”

Haggerty had ventured out to the 24-hour Sainsbury’s in Harringay, north-east London, with a friend in the hope of snapping up a bargain flat screen TV. “But so many people pushed in the queue we didn’t have a chance,” she said. “The poor woman who was second in the queue was pushed out by the crowd of youths, she didn’t get anything.

“People were behaving like animals, it was horrible,” she said. “I only saw two security guards.”

One of those lads was Andy Blackett, 30, an estate agent, who had two trolleys full of bargains. “I got two coffee makers, two tablets, two TVs and a stereo,” he said. “I couldn’t tell you the prices, but I know they’re bargains.”

But his mate Henry Fischer, a 19-year-old student, wasn’t as successful. “Someone snatched my telly from me – it’s cos I’m the smaller one.”

Blackett, Fischer and some mates had driven to Sainsbury’s at 12.45am after retreating from the “bedlam” of Tesco’s 24-hour Lea Valley store, where the Black Friday sale started at midnight. “Tesco was scary so we came here instead,” Blackett said.

More than a dozen police officers attended the Tesco store on Glover Drive, Upper Edmonton, as scuffles broke out between eager and frustrated shoppers. Customers were seen tearing down cardboard hoardings put in place to hold back sale items until the stroke of midnight.

Tesco delayed the sale of its most popular sale items – TVs – for almost an hour until police brought the situation under control. One officer was overheard criticising the manager for failing to ensure adequate security and suggested the sale should be suspended altogether.

The Tesco store is across the road from an Ikea that was the scene of riots when it opened with a midnight sale in 2005.

Police intervened at other stores including Tesco in Willesden and Surrey Quays, and an Asda in Capital Way, Edgeware, just before the doors opened at midnight. Greater Manchester Police said at least two people have been arrested at Black Friday sales events already this morning.

The force said on its Twitter feed: “Keep calm people!”. South Wales Police also reported receiving a number of calls from staff at Tesco stores after they became “concerned due to the volume of people who had turned up to sale events”.