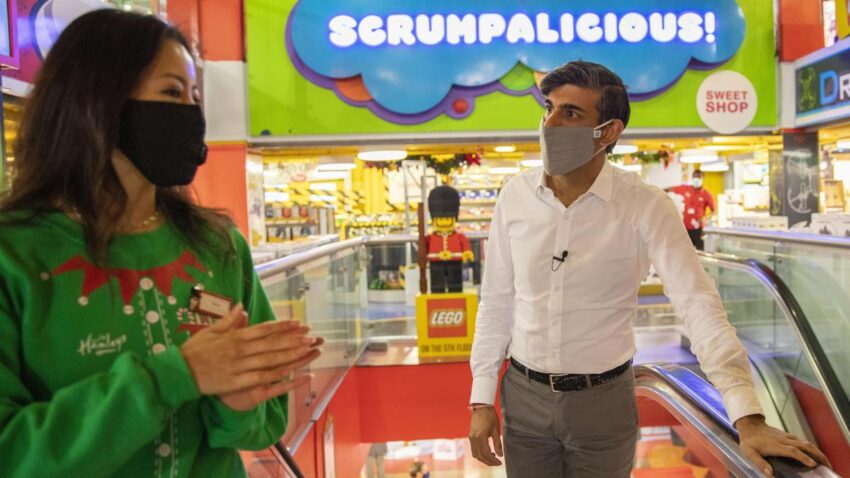 Rishi Sunak has said that presents will be available to buy at Christmas despite the supply chain crisis but appeared to rule out helping businesses with rising fuel costs.

The chancellor blamed the delays on global factors and said that “it’s not the government’s job” to intervene by managing the price of individual products. He said he was confident that shelves would be stocked during the festive period.

His comments came after Felixstowe, Britain’s largest commercial port, said yesterday that the supply chain crisis had caused heavy congestion. A typical shipping container has been spending more than nine days at the Suffolk port before it is collected, more than double the average “dwell time” last year.

However, the world’s largest shipping firm has diverted some of its biggest cargo ships away from the UK, leading to fears of a shortage of toys, clothes and electronics at Christmas.

Maersk, the Danish shipping giant, announced that larger vessels would be ordered to dock elsewhere in Europe to avoid congestion at Felixstowe caused in part by a shortage of lorry drivers.

Supermarkets and retailers across the country are now expected to bring Christmas sales forward by as much as a month to avoid shortages and last-minute panic buying.

Following talks with the government, retail bosses have said that promotions will be launched early to pre-empt a rush. Toy store bosses warned that shortages of popular Christmas gifts would continue for months and advised parents to buy early.

Gary Grant, founder of The Entertainer, a nationwide chain of 170 toy stores, said that a dearth of lorry drivers and logjams of shipping containers at ports were behind the shortages. Barbie dolls and Paw Patrol toys are among the favourites he expects to run out quickly.

Although shops looked “very full right now”, demand “will outstrip availability”, Grant told the BBC. “There’ll never be toy shops with no toys. There will be toy shops without all the toys that they would normally expect to have due to the shortages, and that is largely down to transportation and warehouse issues.”

The PlayStation 5, already in short supply because of a global shortage of computer chips, has sold out, with none in stock at Argos, Amazon, AO.com or Game. Independent sellers are taking advantage, with one charging £1,249 on Amazon Marketplace and another seeking £714 at OnBuy.com. The recommended retail price is £449.

There are reports today that a million Elf on the Shelf figures are waiting to be shipped out of China.

The chancellor rejected accusations by the head of UK Steel that the government had created a “hostile environment” for industry. He said that ministers would continue to work constructively with businesses on the problems, which he admitted would take time to resolve.

“They are global in nature, so we can’t fix every single problem, but I feel there’ll be a good provision of goods for everybody and we are working out ways to remove blockages where we can,” he said.

Echoing Boris Johnson, who has blamed the problems on UK firms “mainlining” migrant workers, Sunak said that the government refused to increase immigration to address the labour shortages.

“I think there’s a broader point about historic reliance on immigration,” he said, “and that’s something we’ve discussed in this country together and collectively decided that’s not the right model going forward. We want to move to a higher wage, higher skill economy.”