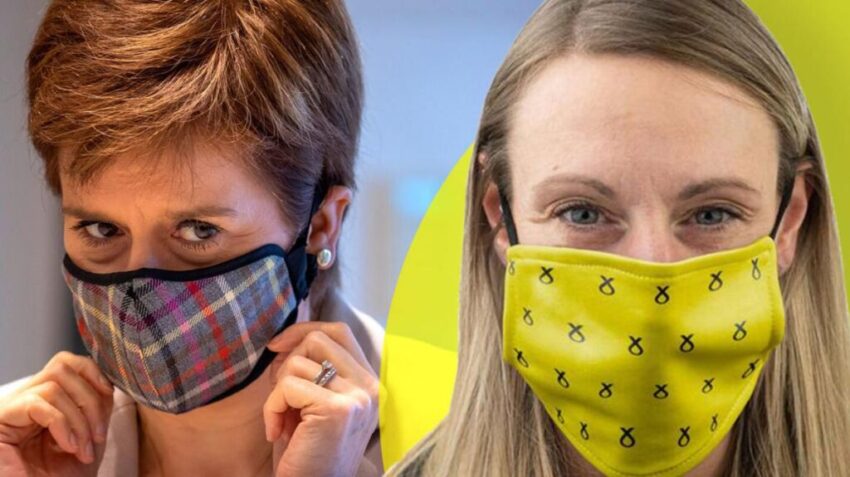 Nicola Sturgeon is facing opposition demands to withdraw branded face coverings from the SNP’s official store amid claims the party is trying to “make money from a global pandemic”.

Anyone who pays between £8 and £14 can buy official Covid-19 merchandise from Scotland’s party of government. A banner advert on the online store directs shoppers to the products.

This month the first minister made wearing face coverings compulsory in all Scottish shops. People who do not comply face a £60 fine, rising to up to £960 for repeat offenders. Ms Sturgeon has said the law is likely to remain in force for the “forseeable future”.

The “fully branded official SNP facemasks” are promoted as “a breathable polyester and cotton mix” that includes two carbon filters which are “shown to be effective in blocking the vast majority of airborne particles”, according to the SNP website.

It adds that the items which come in five designs including SNP logos, a Saltire, a “Yes” logo and a grey tartan, are not classified as “PPE equipment”. For nationalists who are feeling flush, an extra £6 will buy “multi-functional headwear” that can be worn in 12 different ways, including a balaclava, headband, bandana, neck warmer and facemask, the online store says.

Last month The Times revealed that the SNP’s central office in Edinburgh decided to hold back money from local branches to plug a funding gap it says has been created by the pandemic.

The decision to profit from products made mandatory because of a virus that has been linked to the deaths of more than 4,000 people by the National Records of Scotland has not gone down well with some in the party. No other political parties appear to sell such products on their websites.

Annie Wells, deputy leader of the Scottish Conservatives, said: “The decision by the SNP to try and make money from a global pandemic was inexcusable. Nicola Sturgeon must immediately act to ensure this stops and is never repeated. Any money made from this tasteless venture should be donated to causes fighting coronavirus and its ruinous impact.”

Stephen McCabe, a Scottish Labour Inverclyde councillor, suggested the masks were “in extremely poor taste”, while Glasgow Labour councillor Malcolm Cunning said the SNP “would put a logo on their granny’s coffin if they thought it would gain them a single vote”.

An SNP spokesman said: “Just like football clubs and many others, we’ve launched our own branded face coverings. We would encourage everyone to help suppress the virus by following the guidance on face coverings.”

The SNP had 125,482 members as of December. According to its 2018 accounts, more than 80 per cent of the £4.7 million brought in by the SNP was from members and supporters. This included £2.2 million in membership fees.