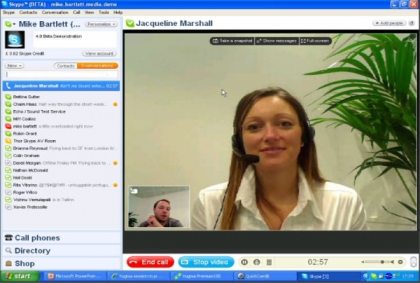 EBay has admitted that it might have to close down the company. It said it was trying to develop alternative software but if that did not work, or if eBay lost the right to the original software: “Skype would be severely and adversely affected and the continued operation of Skype’s business as currently conducted would likely not be possible.”

The dispute also threatens eBay’s plan to spin off Skype, scheduled for next year.

Earlier this year, Skype filed a claim in London against Swedish company Joltid, which is controlled by Skype co-founders Niklas Zennstrom and Janus Friis. Skype is seeking resolution on a dispute over a software licensing agreement between the parties that Joltid was seeking to terminate.

“In particular, Joltid has alleged that Skype should not possess, use or modify certain software source code and that, by doing so, and by disclosing such code in certain US patent cases pursuant to orders from US courts, Skype has breached the license agreement,” eBay said in the filing.

Joltid brought a counterclaim, reiterating that it held the rights to the peer-to-peer technology and that Skype was in violation of the original agreement.

A court hearing has been set for June in London.

In its regulatory filing confirming the parent company’s recent quarterly profits, eBay acknowledged that the new software it was working on had no guarantee of success.

“Although Skype is confident of its legal position… Skype has begun to develop alternative software to that licensed through Joltid. However, such software development may not be successful, may result in loss of functionality or customers even if successful, and will in any event be expensive,” eBay said.

EBay announced in April that it would spin off Skype through an IPO, saying the timing would depend on market conditions. Executives acknowledged that the unit, while fast-growing, did not mesh well with eBay’s core marketplaces division.

Mr Zennstrom and Mr Friis, backed by a number of private equity houses, have been in talks with eBay over the possibility of buying the company back but the negotiations have stalled.

Skype, which started in 2002, allows users to make calls from their computers to landlines, mobile phones and other computers. At its heart is key peer-to-peer technology created by its founders who also created the file-sharing software Kazaa.

The service has continued to grow rapidly. It has added 37.3 million users in the past year, bringing its total number of registered users to 480.5 million, making it the most widely-used international calling system in the world and an essential tool for many small & medium sized businesses in the UK and across the globe.

The legal battle over the licensing of the software will need to be resolved before eBay’s board, led by chief executive John Donahoe, can move forward with flotation plans for Skype.

A spokesman for Joltid said: “Skype has breached its licence and infringed Joltid’s intellectual property. As a result its licence has been terminated. Joltid is enforcing its rights in the courts. Like any member of the creative industries, Joltid will defend its innovations with determination. It is certain of the validity of its position and looks forward to the resolution of the issue.”