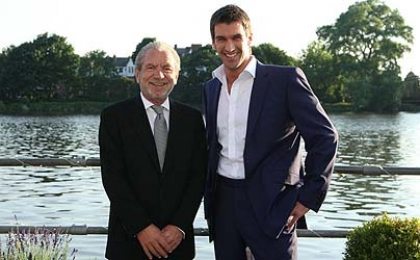 Hanna Sebright, a £70,000-a-year managing director at Amscreen Healthcare, is
expected to make a series of allegations about Sir Alan’s behaviour and the
conduct of other senior executives at the company, including his eldest son
Simon.

She will also claim that she was subjected to lewd and offensive remarks made
by former Apprentice winner Lee McQueen.

The 46-year-old claims Mr McQueen called her ‘heavy breasted’, made comments
about other women’s bodies and once described how his friend had had sex
with two women the previous night.

The mother-of-three lodged legal papers with employment tribunal offices in
Stratford, east London, days before Downing Street announced the tycoon’s appointment and
is seeking £140,000 in damages.

She is claiming constructive unfair dismissal against Sir Alan after he bought
the firm, which specialises in selling advertising space on digital
information screens in schools and hospitals.

Mrs Sebright says that she became so ill with stress that she shed nearly two
stone and suffered severe migraines. She claims she has been unable to work
since April 10.

It is understood that Mrs Sebright will claim the inclusion of Apprentice
winners and finalists created a “poisonous” atmosphere at the
company.

In February, Mrs Sebright says she was told to make room in her division for
Kate Walsh and Yasmina Siadatan, the two female finalists in this year’s Apprentice,
so that the two could be pitted against the other in a real work environment.

Mrs Sebright alleges Sir Alan, who is worth around £780million, supported his
male executives over her and claims he was deliberately rude, describing her
firm as “a cottage industry”.

She claims the tycoon deliberately undermined her at a sales meeting when he
interrupted her and spoke to her in a disparaging manner.

On behalf of Sir Alan, his son and Mr McQueen, a spokesman for Amscreen
Healthcare, said: “Amscreen was notified of these tribunal proceedings
on Monday, June 8 and intends to vigorously defend them.”

The allegations are vigorously denied by Sir Alan. Mrs Sebright is on sick
leave and declined to comment. The case will be heard later this year.