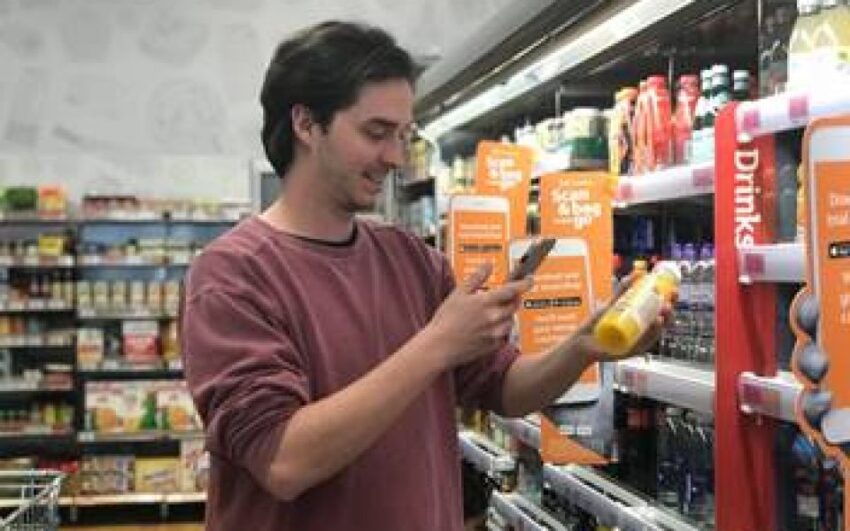 Sainsbury’s has launched the UK’s first till-free store in London with plans to roll the new digital system out across the country.

The Holborn Circus shop will see customers scan and pay for products using the company’s app on their phone – in a drive to speed up shopping.

When they have finished, they scan a QR code to complete the process and receive their receipt by email.

The supermarket giant has been experimenting with the technology, called SmartShop, since August and said 82 per cent of transactions in the store were already done digitally.

The Sainsbury’s Local – which sits across the road from the company’s head office – was stripped of its checkouts and revamped ahead of the three-month trial which started on Monday.

But for customers who struggle with the technology, paying by cash or card is still an option through a one-man helpdesk.

In a further bid to increase efficiency, products such as wine, beer and cigarettes will not be sold due to the time it takes to verify a customer is over 18.

Clodagh Moriarty, group chief digital officer at Sainsbury’s, said: ‘We know our customers value their time and many want to shop as quickly as possible – technology is key to that.

‘This is an experiment rather than a new format for us – it hasn’t been done in the UK before and we’re really excited to understand how our customers respond to the app experience.

‘We’ll be with our customers and colleagues all the way over the coming months, iterating continuously based on their feedback before we decide if, how and where we make this experience more widely available.’

Sainsbury’s has previously denied the scheme was meant to cut down on staff, with Ms Moriarty adding: ‘No one will lose their jobs, absolutely not. The power of this is combining people and technology.’

It comes after Amazon opened its first till-free store in Seattle in January last year.

The world’s largest e-commerce marketplace set up cameras and sensors at its Go shops to monitor what a person buys before charging their purchases to a registered card as they leave the store.

Supermarkets including Tesco, Co-op and Waitrose have also tested the apps and Amazon were reportedly looking to bring it to the UK.

Sainsbury’s has plans to roll the new system out nationwide but they are on hold to first see how customers react.

The technology is currently being trialled in eight of its Local branches in London.

Sainsbury’s, which is fighting to stop customers defecting to Tesco, Aldi and Lidl, was hit by a setback last week after a £12billion merger with Asda was blocked by competition authorities.