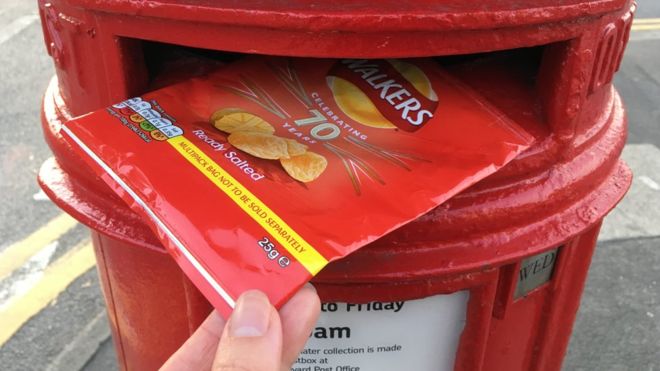 Royal Mail has stepped into a row between environmental campaigners and crisp manufacturer Walkers – by urging people not to post empty crisp packets.

Campaigners urged people to post crisp bags to the firm, in protest against them being non-recyclable, and “flood Walkers social media with pictures of us popping them in the post”.

Royal Mail is obliged by law to deliver the bags to Walkers’ freepost address.

But they cannot go through machines and must be sorted by hand, causing delays.

Campaign group 38 Degrees, which encouraged people to post their crisp packets back to Walkers, has been asked to comment.

A Royal Mail spokesperson said: “We strongly encourage customers not to post anything into the postal system which is not properly packaged.

“Crisp packets can’t go through the machines, they are not normal mail items therefore my hardworking colleagues need to manually sort them, which adds to time.”

People have been taking selfies of themselves posting the crisp packets and putting them on social media with the hashtag #PacketInWalkers.

“By posting our packets to them, we can bring the crisis right to Walkers door,” a campaigner wrote on the 38 Degrees website.

“Imagine the scenes in Walkers HQ when hundreds of packets are delivered each day and it’s all over the news and people are talking about posting their packets on social media.”

Royal Mail said it had handled about 30 crisp packets so far.

Are the alternatives any better?

Susan Selke, director of the School of Packaging at Michigan State University, said crisps needed a very good oxygen barrier because of their high fat content and other packaging alternatives may have greater overall environmental impacts.

“From looking at the Walkers website, it appears that their packaging is similar to that used for the majority of snack foods,” she said.

“Because of their fat content and the potential for rancidity, chips [crisps] need a good oxygen barrier,” said Dr Selke.

“The old alternative was paper or plastic laminated to aluminium foil, usually coated on the inside with a plastic layer for heat-sealing. This structure would also not be accepted for recycling in most cases, is much heavier, and will have greater overall environmental impacts, for a variety of reasons, so it would not be an improvement.”

She said more rigid packaging could be used to provide a good oxygen barrier but this would result in more material being used.

Walkers said its packaging had been designed to keep its snacks fresh and prevent food waste.

The Leicester-based crisp manufacturer confirmed it had started receiving crisp packets and claimed it would use them “for research”.

“We recognise the efforts being made to bring the issue of packaging waste to our attention,” a spokesperson. added.

“The returned packets will be used in our research, as we work towards our commitment of improving the recyclability of our packaging.”

It has pledged to make all its packaging 100% recyclable, compostable or biodegradable by 2025.

It is piloting compostable packaging in the US, India and Chile.