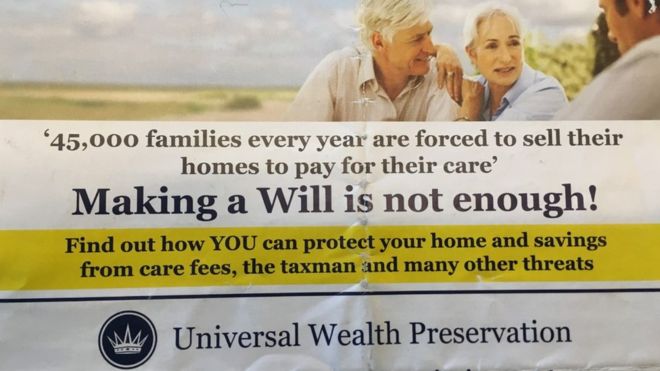 The collapse of an inheritance planning firm that has left dozens of clients fearing for their life savings is being investigated by police.

Universal Wealth Management ran seminars called Keep It In The Family, in which they promised to protect people’s assets from inheritance tax.

Two people connected to the firm have been arrested and released as inquiries continue.

After attending a seminar, people typically put their home into a trust run by the company, which meant they no longer officially owned it.

The idea was that local authorities would then disregard the property in the event someone needed long-term care.

Earlier this year, some clients started to complain but their emails and calls were going unanswered.

In April, two people connected with the firm were arrested on suspicion of fraud. They have since been released but remain under active police investigation.

A Suffolk police spokeswoman said: “Two people who were arrested on suspicion of fraud as part of a large-scale financial investigation have had their police bail cancelled.

“Both have now been released under investigation whilst inquiries are continuing.”

The national body that deals with fraud on behalf of victims, Action Fraud, said at least 140 clients of Universal Wealth had contacted it about missing money.

The BBC has spoken to a number of people who appear to have lost significant amounts of cash.

Nigel Watson, from Sabden, near Burnley in Lancashire, attended a Universal Wealth seminar with his parents in 2014.

Both signed their houses over to a Universal Wealth Preservation trust, while Mr Watson’s parents handed over £250,000 – their entire life savings.

Mr Watson found out about the collapse of Universal Wealth when he got a letter from a former employee, offering to change the trustees for a fee.

“They were totally in the dark about it,” he said. “And I had this bombshell piece of news, which I had to decide whether I told them about or not.”