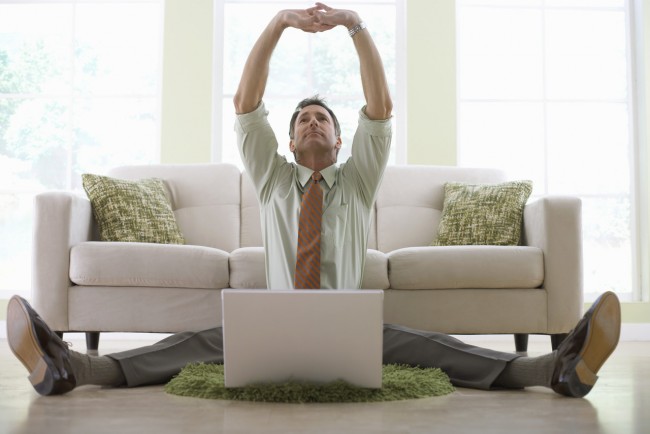 Researchers have discovered the secret to ultimate work place productivity – three days in the office and two days working from home.

According to a study of 1,019 British office workers by Hammonds, 82 per cent said they would be more productive if they could split their working week with a ratio of 3 days in the office to two at home.

However, although the perfect balance includes two days at home – 52 per cent of home-workers admitted to having a daily “siesta” – and a further eleven percent admitted working the day from their bed.

From a boss’ perspective, 34 per cent said they were ‘flexible’ in terms of home working – but an old-fashioned 20 per cent said they preferred their team to do a traditional 9 – 5. 2 per cent of bosses said they prefer having their staff where they can see them, due to the fact they do not fully trust the consistency of their employees work when they are not present. More than half of bosses claimed they were happy for their staff to work from home for some – or even all of the week as long as the job was done.

Kirsty Oakes, a spokesperson for Hammonds Furniture, which commissioned the study said: “With working from home becoming increasingly popular in the UK, it is interesting to discover that dedicated work spaces aren’t considered a necessity, with people opting to work from their sofa, the kitchen table or even the bed!

“Having a dedicated space for working from home will enable you to still be as productive and focused as being in the office. This doesn’t necessarily need to be a devoted office room but it should be more than just a desk in a spare room. You should consider storage, lighting and how much space you will need for your work.”

It has also been emerged that a large percentage make the most of working from home – 10 per cent getting stuck into their workload in their pyjamas and 9 per cent in a onesie. In contrast, 11 per cent opt for a more conventional, formal attire of shirt and tie for their day of home working.

In consequent, it does seem that whilst we would all love to have more time at home during the week – even if it means working, we still manage to develop a heightened amount of jealousy towards those who do so. When asking the office workers how they felt about ‘home-workers’, 32 per cent stated their belief that they ‘have it easy’, whilst possibly a more arrogant 23 per cent said ‘I work harder than them’.