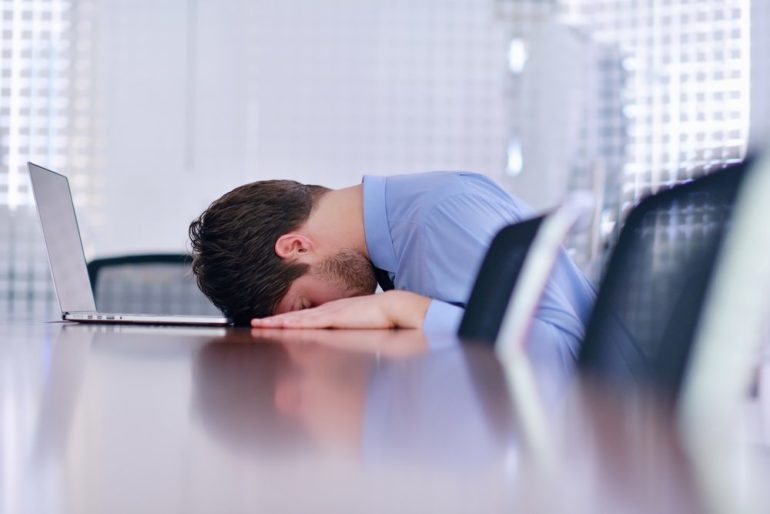 Almost one in four adults in the UK are unhappy at work, but age and a lack of confidence are stopping them from making a career change, according to a new poll.

A new survey questioned 1,000 UK adults in full and part-time employment on how they feel about their working lives. It found that four in ten see their job as “a means to an end”, and revealed vast differences in work satisfaction based on whether respondents view their employment as a job or a career.
The research found that three quarters of people define their current working situation as a job, compared to 28 per cent who say they have a career. 30 per cent of people with a ‘job’  say they are unhappy at work, against just 11 per cent of people with a ‘career’ and 54 per cent of people with a ‘job’ see it as a means to an end, versus just 10 per cent of those with a  ‘career’. Just one in five people with a ‘career’ feel that they are making good use of their qualifications, with the number dropping to 10 per cent for those who see their work as a job.
Surprisingly, the way people see their work situation varies very little with age, though there is a noticeable increase in the number who say they have a career between the ages of 25-34. At this point, for both men and women, the percentage of people viewing themselves as having a career jumps from a national average of 29 per cent to 44 per cent.
However, despite this temporary improvement in career progression and satisfaction, 41 per cent of employees believe they are too old to make a change by the time they turn 34. Alongside age, family commitments, the pressure of uncertainty, and lack of confidence are the most common reasons why people do not pursue their dream career. Lack of adequate qualifications and being too comfortable in their current role were also cited as barriers to career progression by one in five respondents.
Alex Reid, Careers Adviser at GSM London, said: “All evidence suggests that people who feel they have fulfilling careers and have high levels of job satisfaction are the most productive employees, so it’s a real concern that so many people appear be unhappy at work. The good news is that the labour market is becoming more fluid, with the idea that people will hold multiple jobs throughout their working lives fast becoming the norm. This means that people have a greater opportunity than ever before to take steps that set them on new career paths.
“A lot of people don’t have the luxury of stepping out of the workforce for extended periods, regardless of how unhappy they are in their jobs or how keen they are to develop new skills. This is why higher education is changing. For instance, GSM London has pioneered accelerated degrees that can be completed in two rather than three years, and are introducing work-based learning programmes. We’ve also invested in a range of careers programmes that help people develop attributes attractive to employers alongside their studies.
“Our insight also suggests that age does not need to be as much of a barrier as our survey suggests people think. Over 80% of our students are mature, and prove to be strong candidates for employers looking to bring people in that combine degree-level skills with rich life experience.
“As our research shows, those with fulfilling careers are much happier than those with jobs, so it’s definitely worth people considering all options for change and overcoming assumptions about the things that might stand in their way.”