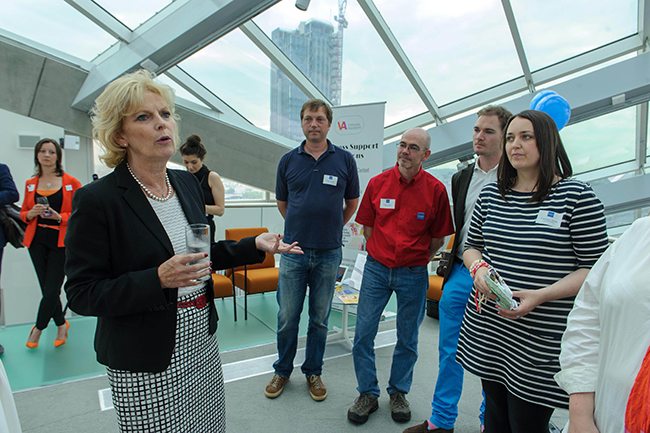 The appointment of a commissioner to deal with the ‘culture of late payment’ in Britain, which can cripple small businesses, is a key measure in the Government’s Enterprise Bill, published this month after its first hearing in the Lords.

Soubry said: ‘It is absolutely not about punishing companies. It is about good practice. We know we have an issue with late payment.

‘We also have a problem with big companies changing their terms and conditions to pay ever later.’
The Minister added: ‘The commissioner will, I hope, be doing a lot of work behind the scenes.
‘I spoke to the commissioner in Australia and was impressed. Most of the time he is on the phone to the chief executive of whichever company it is.

‘He can say: “We have a number of firms saying your business is doing such and such”. That’s where I want us to be.’

She accepted that in some cases companies would not react, but said there would be an investigation if a complaint is raised, and the company could be named in the commissioner’s annual report.

‘Ideally we’ll fix this so this doesn’t have to happen,’ she said, adding the commissioner will have a budget for just a small team and will not be part of an unruly quango.

A study last week from the Asset Based Finance Association claimed firms with fewer than 250 staff are owed £67.4 billion in unpaid invoices – up 8 per cent from £62.5 billion last year, and up 36 per cent from £49.5 billion in 2011, as payment times grow.

Research from financial software provider Intuit has found that microbusinesses – those with ten staff or fewer – spend an average of 19 working days a year chasing invoices, with 32 per cent saying they had to take out loans or other forms of credit to pay suppliers and wages because of late payments.
And a new survey from Crunch Accounting has found the sectors in which freelancers are best and worst at chasing payments. IT contractors take an average of just 19 days to settle invoices, while at the other extreme videographers are paid in 31 days on average.

‘Big customers will continue to call the shots and be all but immune to pressure from a commissioner.
‘Levelling that playing field will take more than just one commissioner, and will be the work of many years because it requires a fundamental change in attitude.’