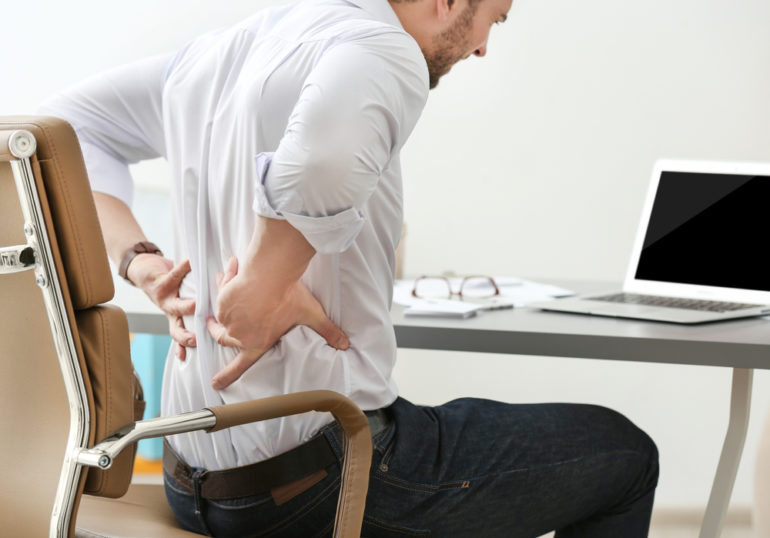 It seems that office life is taking its toll on Brits, as almost three quarters of UK employees blame aches and pains on their work.

The list of work-related ailments is a long one, with 43 per cent regularly complaining of eye strain, 32 per cent suffering with severe headaches, leading to a quarter of office staff visiting their optician in the past year.

The research also revealed that 39 per cent of employees in the UK have to battle through back pain while in work, and 31 per cent experience neck strain on a regular basis.

With the average person working 34.5 hours a week, and the maximum number of screen breaks being regularly taken coming in at just three a day, it’s no wonder Brits are experiencing so many work-related grievances.

The survey shows that being sat at a desk all day is harmful, as one in six Brits admit they suffer with Repetitive Strain Injury (RSI). However, it could be down to the fact that 70 per cent don’t have their work stations set up correctly.

The shocking thing is that despite the injuries from being at a desk all day, Brits are more sedentary than ever, with just 36 per cent stating that they try to get out of their office chair to get steps in. AXA healthcare recently published research which shows that the average UK worker is sat down for nine hours every day.

It seems that it’s not just muscular injuries that affect office workers. We know that small spaces are a hotbed for germs, and 10 per cent of Brits state that colds and flu bugs get passed around their offices at least every three weeks.

Despite the possibility of infecting their co-workers, just 22 per cent of staff said they would take a sick day if they had a contagious illness. The average UK worker is reported to have two sick days every year, with a third taking none at all.

Catherine Bannan, HR Manager from Printerland.co.uk, commented on the findings, stating: “Health and safety procedures, such as fire drills and hazards are well covered by businesses, yet workplace wellness is something we need to give more attention to.

“You can easily help your employees by undertaking individual desk assessments, ensuring your staff’s computer equipment and monitors are set up properly, and that their chairs are appropriate for sitting on all day.”

Office cakes and treats are also playing havoc on our health. With all the Friday treats and birthday celebrations, 45 per cent of working Brits admitted they’ve gained weight since working in an office, with 30 per cent piling on more than a stone.