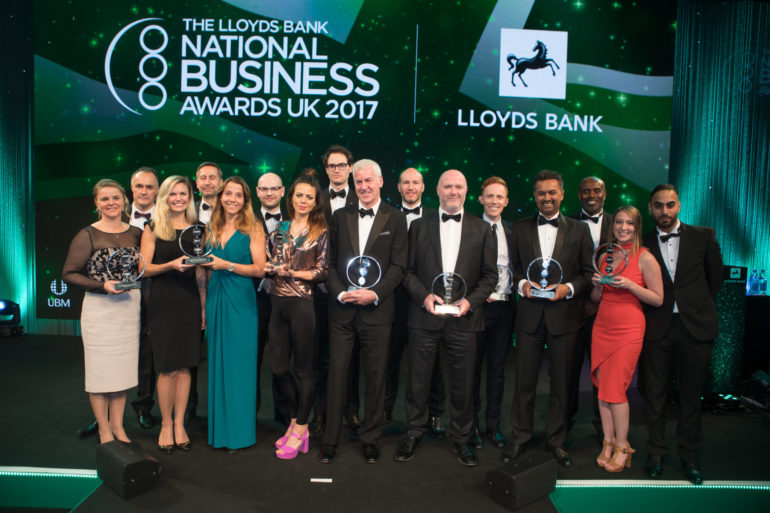 The winners of the 2017 Lloyds Bank National Business Awards have been revealed at the 16th annual gala dinner ceremony.

The winners across 16 categories of The Lloyds Bank National Business Award 2017:

The Lloyds Bank New Business of the year: Signal (London)

The Smith & Williamson Scale-Up Business of the year: Perkbox (London)

The Inflexion Entrepreneur of the year: Bill Holmes of Radius Payment Solutions (Crewe)

The Amazon Digital Business of the year: Missguided (Manchester)

The Duke of York New Entrepreneur of the year: Maria & Sara Trechman of Well & Truly (London)

The Lloyds Bank Small to Medium-Sized Business of the year: SDS Limited (Biddisham)

The Lloyds Bank Mid-Market Business of the year: Accesso (Twyford)

Alan Rubenstein, CEO of Pension Protection Fund was awarded the Keys Business Concierge Leader of the Year. This award recognises the personal imprint of the UK’s most high profile leaders and industry champions from the private, public and third sectors. The finalists were judged on their achievements as business leaders over the last 18 months, and their personal achievements over the course of their career.

David Oldfield, Group Director, Lloyds Bank Commercial Banking said “We’re proud to support the National Business Awards which celebrate the outstanding accomplishments of businesses and the people leading them. Thriving and innovative businesses such as these are pillars of our communities and crucial for the success of the UK economy.”

Nina Wright, Chief  Commercial  Officer  &  Transformation  Director of UBM  EMEA,  organisers  of  the event  said: “Another fabulous ceremony celebrating the best of British ambition. The Lloyds Bank National Business Awards are the UK’s most recognised business accolade, a chance for these flourishing companies to celebrate their achievements in the diverse company of others recognised for high performance. Congratulations to all of our finalists and of course, the 2017 winners.”

For more information and to find out how to register your business for the 2018 National Business Awards, visitwww.nationalbusinessawards.co.uk.