New research has shown that one if five Brits are shopping with independent retailers, with around 55 per cent of people shopping with them once a week and 8 percent hitting the stores every day.

The research, conducted by The Leadership Factor on behalf of myHermes, polled 2,000 adults from across the UK to build a picture of shopping habits and attitudes towards independent retailers.

Currently, one in nine adults now claim to actively seek to shop with independent retailers, with Londoners most likely to seek out independents at 19 per cent. 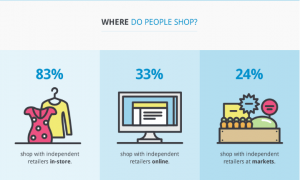 Not surprisingly, the 25 to 34-year-old age group is most likely to shop online, followed by 18 to 24-year-olds, suggesting this shift towards shopping online with independent retailers will continue.

Joanne Morley, Head of Marketing at myHermes, said: “Independent retailers are facing their toughest battle from online retailers such as Amazon, who are changing Britain’s high streets.”

“This research helps independent business owners understand what they need to do to grow in an increasingly competitive marketplace and attract new customers – both online and offline.”