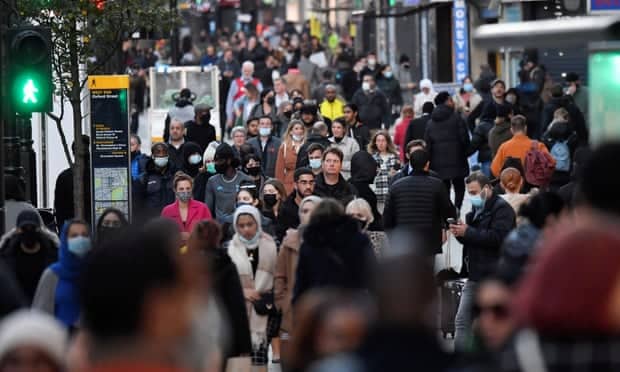 The four-day countdown to the new coronavirus lockdown restrictions in England that began on Thursday triggered a mini boom for store and restaurant owners as consumers rushed to buy Christmas gifts and enjoy a last eat-out supper.

The dash to the shops meant retail parks in England attracted more customers than in the same period last year, with footfall rising above 2019 levels for the first time in the pandemic, according to the retail data experts Springboard. High streets and shopping centres also experienced a surge in shopper numbers, although footfall was still lower than in 2019.

The scale of the four-day spending spree in England was supported by figures that showed a surge of last-minute dinner reservations before the month-long shutdown.

Meal reservations for Sunday night, the day after Boris Johnson announced England was going back into lockdown, were 11% higher than on the same day in 2019, according to the online reservations hub OpenTable. By Wednesday night bookings were 70% higher, according to the company’s data, which is based on a sample of 20,000 restaurants.

The new restrictions have forced 500,000 shops, restaurants and pubs to close their doors until 2 December. All “non-essential” stores – a group that includes shops selling clothing, homewares and technology – have now shut, leaving only selected outlets such as food shops, DIY chains and garden centres still trading.

Diane Wehrle, Springboard’s insights director, said that over the four days footfall was 11% higher across all destinations than in the previous week. People made a beeline for retail parks, with their large stores and car parking facilities, as these outlets were regarded as relatively safe places to shop during the health crisis.

“The extent of the uplift meant that footfall in retail parks was higher than in 2019 on each of the three days from Monday to Wednesday – this is the first time that footfall has been higher than last year since the pandemic,” said Wehrle. “The drop from last year also narrowed significantly in high streets and shopping centres, with footfall 19% lower than 2019 in high streets, and just 9% lower than 2019 in shopping centres.”

The lockdown has had an immediate effect. Shopper numbers on Thursday morning were 16% lower than the same time last week.

The rush to shop and socialise on Wednesday evening led to some of the worst congestion on record. According to data from the satnav specialist TomTom, traffic in London peaked at the highest level since 2018 between 5pm and 6pm on Wednesday. By Thursday lunchtime, traffic was significantly below normal levels.

Similar patterns were seen in cities such as Birmingham, Newcastle and Bristol, all of which had had heavy traffic in the first half of the week.

Morning rush hours appeared largely unaffected, with many people already working from home, though schools were open. Traffic during the late morning and early afternoon dropped below the pre-Covid averages of 2019.

Train operators said passenger numbers appeared steady at an estimated 30% of normal patronage, but they expected a bigger decline this weekend, with fewer leisure and shopping trips happening. Network Rail said footfall at its biggest stations was 28% lower on Thursday morning than the day before.