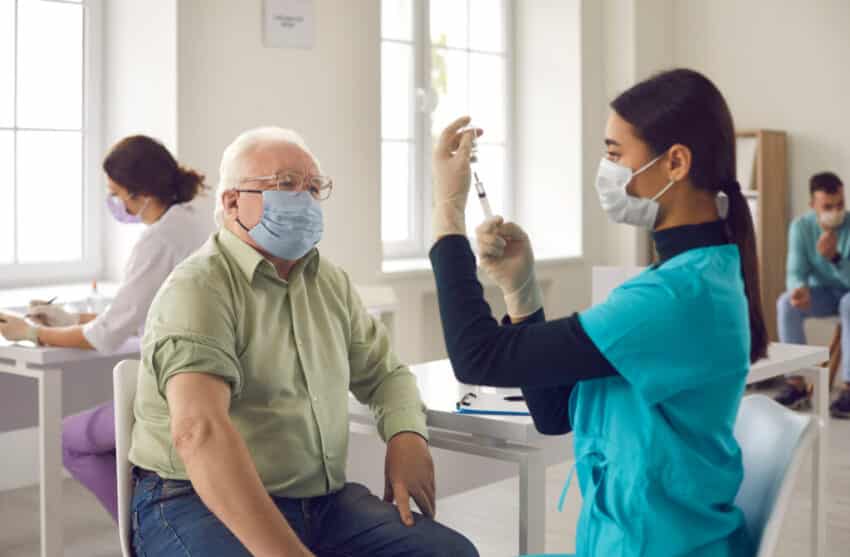 Ten million people could have their second doses of coronavirus vaccines brought forward as the government attempts to stop a faster spreading Indian variant from delaying the end of restrictions.

Cases of the variant have more than doubled in a week and Boris Johnson said yesterday that he was “anxious” about the threat posed by the strain to the route out of lockdown.

Indoor mixing will go ahead as planned on Monday despite calls yesterday from scientists and Dominic Cummings for it to be postponed.

But modelling for Sage has concluded that if the variant is much more than 30 per cent more transmissible than the Kent strain it would be a big risk not to delay the final easing of restrictions next month.

Public Health England yesterday said 1,313 cases of the B.1.617.2 variant had been identified, up from 520 last week. More than half are in London and the north west.

It is one of three strains imported from India first identified in Britain in late April and has been deemed a “variant of concern” because of how fast it spreads. Scientists do not believe the variant is likely to blunt the effectiveness of vaccines but have concluded it could well be more transmissible than the Kent variant now dominant in Britain.

The government is considering bringing forward second doses for the most vulnerable groups in order to protect them from hospitalisation if Britain does see a big third wave caused by the strain.

However, scientists are attempting to balance this against the extra protection thought to be gained by delaying second doses by up to 12 weeks.

Government science advisers urged Europe to take note of the UK’s success in leaving a 12-week gap between doses of the Pfizer vaccine after studies showed that it boosted antibody responses and was likely to have saved lives.

Research released today shows that the antibody response in people aged over 80 was more than three times greater in those who had the second dose after 12 weeks, compared to those who had it after three weeks as recommended by Pfizer.

A separate modelling study from US researchers, published in the BMJ, estimated that delaying the second dose of an effective vaccine could reduce overall deaths from Covid by as much as 20 per cent. Effectiveness of the Astrazeneca jab has also been shown to be better after a longer gap.

Anthony Harnden, deputy chairman of the Joint Committee on Vaccination and Immunisation (JCVI), said: “At the time, there were some sceptics – both domestically and abroad – who thought this was a risky decision … I hope our European friends will be encouraged by these findings, as prioritising the first dose may help to bring the virus under control and save more lives.”

About ten million people in the top priority groups are yet to have both doses, leaving them more vulnerable if exposed to the virus. While most over-65s have had both, only about a quarter of people in their fifties have, leaving more than six million in this group still to be reached. Although more than 90 per cent of those over 75 have had both, that leaves a quarter of a million over-80s who are not fully protected.

The government has forced Blackburn to back down on plans for the surge vaccination of younger adults to deal with rising cases of the Indian variant. The JCVI is considering whether targeting vaccination at such areas could help to tame the variant but is leaning against the idea, fearing that the two or three weeks it takes for immunity to build is too long to contain a fast-moving virus.

Officials are hoping that surge testing of a large number of asymptomatic people in affected areas, which has worked to contain the South African variant, will be able to keep the Indian variant in check. Last night the government announced that surge testing was being deployed in 15 areas across England. Matt Hancock, the health secretary, said: “We are monitoring the situation very carefully and will not hesitate to take further action if necessary.”

Johnson suggested that if this did not work he would resort to local measures rather than delaying the easing of restrictions nationally. Asked if that meant local lockdowns, he said: “There are a range of things we could do . . . Obviously there’s surge testing, there’s surge tracing. If we have to do other things, then of course the public would want us to rule nothing out.”

Steve Baker MP, deputy chairman of the lockdown-sceptic Covid-recovery group, said: “We were told the road map was cautious — in spite of the overwhelmingly promising data on the benefits of the NHS vaccine rollout — precisely so it would be irreversible.”